Sarepta Therapeutics, Inc. (SRPT - Free Report) incurred an adjusted loss of $1.57 per share in the fourth quarter of 2019, wider than the year-ago adjusted loss of 85 cents per share. The wider year-over-year loss can be primarily attributed to a significant rise in operating expenses.

Notably, the adjusted figure excludes one-time items, depreciation & amortization expenses, interest expenses, income tax benefit, stock-based compensation expense and other items. Including all these items, the company incurred a loss of $3.16 per share compared with a loss of $2.05 in the year-ago quarter. The Zacks Consensus Estimate was pegged at a loss of $1.91.

Shares of Sarepta have declined 25.1% in the past year compared with the industry’s decrease of 9.3%. 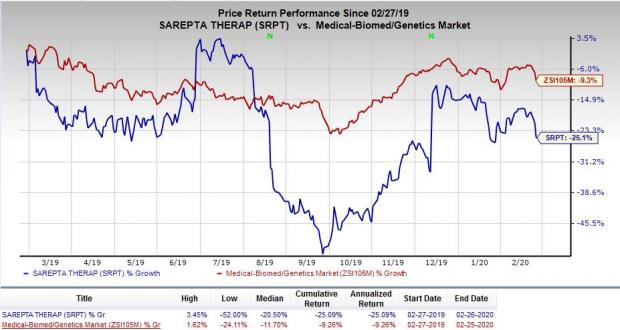 Adjusted research and development (R&D) expenses totaled $135.4 million in the fourth quarter, up 75.8% year over year. The increase was primarily due to increased clinical activities and initiation of certain post-market studies for Exondys 51.

Sarepta provided sales guidance for its key marketed drug, Exondys 51, for 2020. It expects the drug to generate $420 million to $430 million in sales. The launch of Vyondys 53 is in initial stage and hence the company plans to provide guidance on its sales later this year.

In December 2019, Sarepta’s second DMD drug, Vyondys 53 (golodirsen), received accelerated approval for treating patients with confirmed mutation amenable to exon 53 skipping. The company launched the drug in the same month. Currently, it is conducting a confirmatory study — ESSENCE — to gain continued approval for the drug.

The company has initiated a rolling submission of a new drug application seeking approval for its third exon-skipping DMD product, casimersen. It expects the submission to be completed in the second quarter of 2020.

Sarepta is progressing well with the development of the micro-dystrophin gene therapy candidate, SRP-9001, in a phase II study in DMD patients.

In February 2020, the company closed the previously announced licensing agreement with Roche RHHBY related to commercialization of Sarepta’s lead gene therapy candidate, SRP-9001, as DMD therapy in ex-U.S. markets, following a potential approval. Sarepta received $1.2 billion in upfront payment from Roche, which includes $750 million in cash and approximately $400 million in exchange of its common stock. The company is also eligible to receive additional $1.7 billion in regulatory and sales milestones along with royalties on net sales. The companies will equally share global development cost for SRP-9001.