In the past week, Latin American carrier Gol Linhas Aereas Inteligentes GOL announced fourth-quarter 2019 results wherein it reported lower-than-expected earnings per share. However, the bottom line improved on a year-over-year basis with unit costs declining on the back of improved efficiency and higher capacity.

Meanwhile, fears related to the coronavirus persisted to rock the airline stocks with United Airlines (UAL - Free Report) withdrawing its guidance for 2020 as the fatal virus is spreading its tentacles beyond China. Due to this latest health peril, Delta Air Lines DAL temporarily halted its service to and from South Korea. Meanwhile, JetBlue Airways JBLU waived change and cancellation fees as air-travel demand weakened due to the coronavirus woes. Additionally, the International Air Transport Association (IATA) expects airline revenues for 2020 to be hurt in excess of $29 billion due to this adversity.

American Airlines Group (AAL - Free Report) was another newsmaker in the past week as it took a significant step toward ending its long-standing feud with Qatar Airways by virtue of its decision to renew the codeshare partnership.

2. United Airlines became the first U.S. airline to withdraw its projections for 2020 due to the coronavirus outbreak. Reportedly, the airline is at maximum risk among U.S. carriers in terms of its passenger traffic dwindling significantly due to this health hazard. This is because of its international revenues accounting for a higher portion of the top line than its peers like Delta and American Airlines. However, United Airlines hopes to achieve its 2020 earnings target of $11-$13 per share, provided the outbreak is contained by mid-May and demand on the trans-Pacific routes resumes normalcy in five months. (Read more: United Airlines Withdraws 2020 View Due to Coronavirus Fears).

3. The IATA anticipates a 13% drop in passenger demand for the Asia-Pacific carriers. Given that these airlines were expected to witness 4.8% growth, the net effect of this plunge in demand indicates an 8.2% year-over-year decrease in 2020 demand. This contraction in demand is equivalent to a loss of $27.8 billion in 2020 revenues for airlines in the Asia-Pacific region. Majority of this loss will be borne by the Chinese carriers. (Read more: Coronavirus May Slash $29.3B From Airlines' 2020 Revenues).

4 Delta will temporarily reduce the number of flight services to and from South Korea due to the spread of the deadly coronavirus. Notably, South Korea currently has 1,595 confirmed cases of the infection. This Atlanta-GA based airline will be suspending its service between Minneapolis/St. Paul and Seoul-Incheon effective Feb 29, 2020 through Apr 30. Additionally, the airline will lower its flight frequency connecting Seoul with Atlanta and that between Detroit and Seattle to five times weekly through Apr 30. With these fight cancellations, Delta will operate 15 flights weekly from the United States to Korea compared with its usual 28 flights. Also, the airline pushed back the date to launch its service between Seoul-Incheon and Manila from Mar 29 to May 1.

Due to this health crisis, JetBlue announced a waiver in its change and cancel fees for all new flight bookings. Passengers can avail of the privileges on bookings through Mar 11 for the journey completed by Jun 1, 2020. 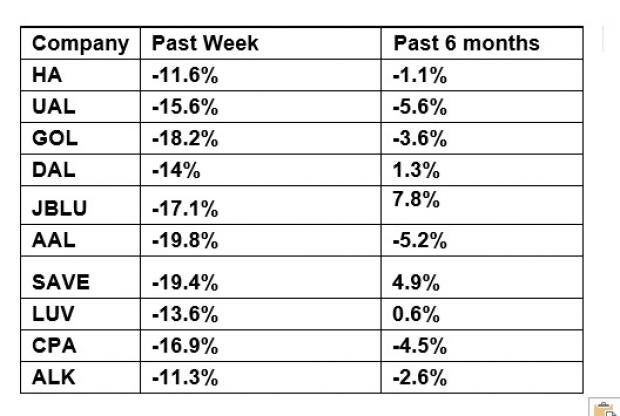 The table above shows that all airline stocks have traded in the red over the past week as the dreaded coronavirus spread to countries other than China induced the NYSE ARCA Airline Index to shed 16.3% of its value. Over the course of six months, the sector tracker has appreciated 2.2%.

Investors will await the fourth-quarter 2019 earnings report of LATAM Airlines LTM, scheduled to be released on Mar 3.