Sprint Corp. S has teamed up with Swisscom and Telia Company in a bid to expand its Curiosity IoT platform to Europe. The Overland Park, KS-based company’s solution has been designed to optimize the burgeoning global IoT environment by bringing the network to the data. Sprint’s Curiosity simplifies business operations through centralized management of IoT devices.

Sprint Curiosity’s virtualized and distributed core network, combined with an operating system purpose-built for IoT, is helping to create ideal conditions to deliver high bandwidth, low latency performance and high availability of critical data. Already in the United States and Australia, the solution allows customers to reduce roundtrip time and improve performance of their IoT applications by keeping traffic local.

The company, which served 54.2 million connections as of Dec 31, 2019, has been making progress on its focused network plan. Sprint has 2.5 GHz spectrum substantially deployed on its existing macro sites, and continues to rollout Massive MIMO, a technology that improves network capacity, enhances LTE performance and allows simultaneous use of spectrum for LTE and 5G. It has thousands of Massive MIMO sites on-air across the country and has about 37,000 outdoor small cells deployed including both mini macros and strand mounts.

On Feb 11, 2020, Sprint said that it has received the green signal for its long-pending $40 billion merger with T-Mobile in Federal Court. Repudiating a lawsuit by a group of states to block the combination, the ruling cleared the path to create a strong rival in 5G wireless services to Verizon Communications VZ and AT&T T. While Judge Victor Marrero approved the deal without stipulations, the Department of Justice and Federal Communications Commission earlier approved it when the carriers agreed to sell some assets to Dish Network. The integration is undeniably going to disrupt the competitive landscape of the U.S. telecom market.

Sprint’s shares have gained 45.3% compared with 12.9% growth recorded by the industry in the past year. 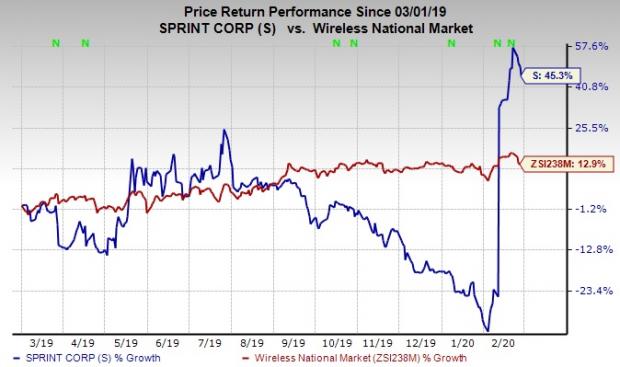 Here's Why You Should Hold Syneos Health in Your Portfolio Now