Airline stocks, which already took a massive hit from headwinds like declining cargo revenues and flight cancellations due to the prolonged grounding of Boeing 737 Max jets, are now grappling with the dreaded coronavirus outbreak.

What is more alarming is that the disease, which originated in the city of Wuhan, the capital of Central China’s Hubei province, is now no longer limited to epidemic proportions. With the outbreak rapidly spreading its tentacles to countries like South Korea, Iran and Italy, the virus attack is fast deteriorating into a full-blown pandemic. This highly infectious disease reportedly claimed more than 2,800 lives.  Moreover, in excess of 82,000 people are already infected by the fatal virus across the globe.

In fact, the United States is also not immune to this latest health hazard with a new case of coronavirus being confirmed in Northern California recently.

Even though coronavirus-related fears rattled most sectors, it is the travel-focused stocks including airlines that majorly bore the brunt of this pervasive outbreak. Evidently, the Zacks Airline industry has declined 12.4% in February compared with the S&P 500 Index’s loss of 3.4%. 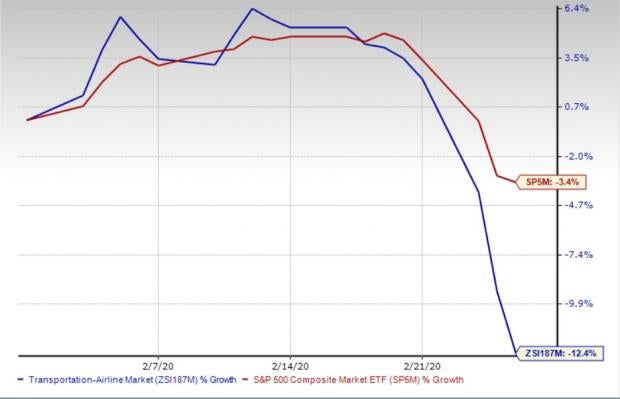 Demand for international travel dwindled due to scores of people speedily contracting this highly contagious disease, which in turn clobbered the airline stocks to a great degree.

Major U.S. airlines, namely Delta Air Lines DAL, United Airlines (UAL - Free Report) and American Airlines (AAL - Free Report) suspended all flights to and from China. Citing the virtual disappearance of demand for its services to China, United Airlines suspended all flight operations to and from China through Mar 28. From Feb 8 onward, it also cancelled flights to Hong Kong. Meanwhile, American Airlines suspended flights connecting its Dallas-Fort Worth and Los Angeles hubs with the mainland China through Apr 24. The carrier’s flight trips from Dallas-Fort Worth to Hong Kong will be non-operational through Apr 23. Additionally, flights between Los Angeles and Hong Kong will remain suspended through Apr 24.

Meanwhile, Delta postponed all flights to and from China through Apr 30. Also, the carrier will temporarily reduce the number of flight services to and from South Korea on account of this widely prevalent global health menace. The Atlanta-GA based airline suspended its service between Minneapolis/St. Paul and Seoul-Incheon through Apr 30. Additionally, the airline lowered its flight frequency connecting Seoul with Atlanta and that between Detroit and Seattle to five times weekly through Apr 30. With these fight cancellations, Delta will now operate 15 flights weekly from the United States to Korea compared with its usual 28 flights. Also, the airline postponed the date to launch its service between Seoul-Incheon and Manila from Mar 29 to May 1.

Hawaiian Airlines, the wholly-owned subsidiary of Hawaiian Holdings HA, decided to suspend flights between Honolulu and Seoul from Mar 2 through April 30. Further, prompted by this health crisis, JetBlue Airways JBLU, carrying a Zacks Rank #2 (Buy), announced a waiver in its change and cancel fees for all new flight bookings. Passengers can avail of such privileges on bookings through Mar 11 for the tour completed by Jun 1, 2020.

It is worth nothing that China, which accounts for roughly 20% of the global GDP, is more important to the global economic scenario currently than it was in 2003. Consequently, any slowdown in the Chinese economy will have ramifications across the globe.

As mentioned above, the airline industry is very vulnerable to the coronavirus-related woes. Consequently, longer the duration of this health peril, more will be the damage to airline stocks.

In fact, United Airlines recently became the first U.S. airline to withdraw its projections for 2020 due to the snowball effect of the coronavirus. Reportedly, the airline is at maximum risk among all U.S. carriers as far its passenger traffic is concerned, which might suffer a significant erosion in the wake of this health hazard. This is because its international revenues account for a higher portion of the top line than its peers like Delta and American Airlines.

Moreover, the International Air Transport Association currently expects airline revenues for 2020 to be hurt in excess of $29 billion due to this adversity.  Additionally, a 13% drop in passenger demand for the Asia-Pacific carriers is anticipated by the IATA for the ongoing year.