Shares of Radius have gained 5.8% in the past year, as against the industry’s decline of 15.4%. 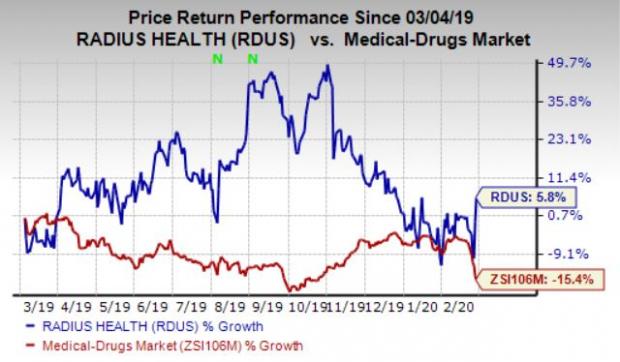 The company incurred a loss of 54 cents per share in the fourth quarter, narrower than the year-ago quarter’s loss of 90 cents and the Zacks Consensus Estimate of a loss of 74 cents. This year-over-year improvement was backed by increased revenues.

The company reported revenues of $55.6 million, surpassing the Zacks Consensus Estimate of $53 million. The figure increased from the year-ago quarter’s $34.4 million.

We remind investors that Radius obtained the FDA approval for Tymlos (abaloparatide) injection in April 2017, for the treatment of postmenopausal women with osteoporosis at high risk of fracture. The company commenced shipments of the drug to wholesalers at the end of May 2017.

Revenues increased 19% sequentially. In 2019, Tymlos captured, on average, 36% of the U.S. anabolic osteoporosis market (based on Patient Months on Therapy, TRx PMOT). In the fourth quarter of 2019, the average U.S. anabolic market share of Tymlos increased to 41% and it achieved a 50% share of new anabolic patient starts.

Research & development expenses for the reported quarter were $34.5 million, flaring up 44% year over year primarily due to rise in elacestrant project costs and abaloparatide-patch project costs. General & administrative expenses decreased 19% to $35.7 million.

Radius expects to complete recruitment of the phase III study, ATOM, later this year. The study is assessing the efficacy and safety of abaloparatide-SC in male osteoporosis and expects to report top-line data in the second half of 2021.

In August 2019, the first patient was randomized in the phase III wearABLe clinical trial, assessing the safety and efficacy of abaloparatide-patch in postmenopausal patients with osteoporosis at high risk for fracture. The study is currently enrolling. Radius implemented a revised enrollment plan, added more clinical sites in the United States, and made progress filing regulatory submissions to expand sites outside the nation. The screen failure rate, which started higher than expected at the initiation of the study is improving, driven by higher screening success at targeted bone specialty sites. Top-line data from the study is expected in the second half of 2021.

The narrower-than-expected loss in the December-end quarter was encouraging as Tymlos continued to gain traction. While Tymlos continues to capture incremental market share, the drug is expected to face significant competition from Eli Lilly & Co's LLY Forteo and Amgen's AMGN Prolia.

Is a Beat in Store for ABM Industries' (ABM) Q1 Earnings?