Toyota (TM) to Build a $1.22B Electric Vehicle Plant in China

Toyota Motor Corporation TM recently announced plans that it will collaborate with local partner FAW Group to build a new electric vehicle plant at Tianjin in China. Reportedly, the companies are aiming to invest around 8.5 billion yuan ($1.22 billion) in the planned car plant.

The plant is expected to produce 200,000 battery-only, plug-in hybrid and fuel-cell vehicles every year. Toyota plans to complete building and start manufacturing in the plant by the early 2020.

Toyota has a significant presence in China, and has so far been extremely successful in the region. The company operates three plants in the Chinese mainland and another one in Guangzhou. Since the Chinese government has demanded that automakers manufacture electric and hybrid cars in the region, Toyota appears to be making the right move. In 2019, despite China’s overall auto market dropping 8.2%, Toyota sold 1.62 million Toyota and premium Lexus cars in China, up 9% as compared to 2018.

Meanwhile, Toyota is also expanding car manufacturing capacities in its Guangzhou-based plant in a joint venture with GAC. Last year, Toyota announced that it will invest 11.33 billion yuan ($1,643.94 million) for new energy vehicle (NEV) capacity expansion. By 2022, GAC and Toyota are expected to add and commission new capacity of NEVs by 400,000 units.

Further, to capitalize on the accelerated global shift to electric cars, Toyota is deepening its focus on manufacturing electric and fuel-cell vehicles, which will bolster its product competitiveness. By 2025, the company plans to introduce fuel-cell-enabled SUVs, and pick-up and commercial trucks. Additionally, Toyota is working on hydrogen fuel stations in collaboration with various partners. The company aims to achieve half of its global sales from electric vehicles by 2025.

Toyota is also making advancement toward self-driving vehicles. It is signing agreements to develop autonomous car technology. Moreover, the company is shifting its vehicle production to new cost-saving platforms, which will slash costs by 20%. It has strengthened ties with Subaru and the partnership intends to make better cars suitable for CASE (connected, autonomous, shared and electric) era.

Shares of the company have gained 10.4% in the past year against the industry’s decline of 1%. 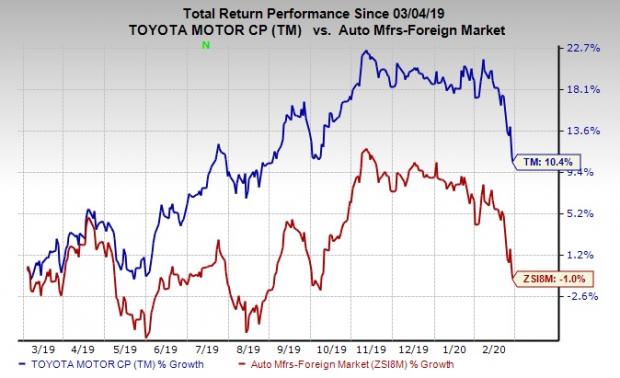 LCI has an estimated earnings growth rate of 20.72% for the ongoing year. The company’s shares have gained 20.1% in a year’s time.

Adient has an estimated earnings growth rate of 17.79% for the current year. The company’s shares have appreciated 25.5% over the past year.