In the wake of an unsolicited bid, Cincinnati Bell Inc. CBB has inked an amended merger agreement with its original suitor. The revised deal with Brookfield Infrastructure Partners L.P. BIP now stands at a valuation of $2.75 billion, which was previously settled at $2.6 billion. Post the announcement of the agreement, shares of this local technology provider jumped 5.9% to close at $13.05 on Feb 28.

Brookfield Infrastructure Partners is a publicly-traded limited partnership involved in the acquisition and management of infrastructure assets globally. Backed by healthy business dynamics, the Toronto-based conglomerate has a diversified portfolio of assets in the transport, utilities and data infrastructure sectors across North America, South America, Europe and Asia Pacific.

Per the revised terms, Cincinnati Bell’s shareholders will be entitled to receive $12.50 in cash for each outstanding share compared with previous cash consideration of $10.50 per share. This amended transaction price is a whopping 62% above the initial closing price of $7.72 on Dec 20. Markedly, the revised agreement was followed by Cincinnati Bell’s non-binding proposal to get acquired by an anonymous infrastructure fund for a cash consideration of $12 per outstanding share.

Considering the increased purchase price, the regional provider of data and voice communications services will pay breakup fee of $21.39 million, which depicts a rise of 19% from the previously announced $17.97 million. The deal, which is aimed at fortifying Cincinnati Bell’s augmented fiber network, is considered as the outcome of an efficient sales process to maximize the value of its stakeholders in the long run. Expected to close by the end of 2020, the transaction, which has been approved by the board of directors, is subject to certain regulatory and shareholder approvals.

Post closure, the transaction is anticipated to enhance the overall financial health of this data and voice communications services provider. This will only be possible with the delivery of advanced integrated communications infrastructure to nearly 1.3 million customers across Cincinnati and Hawaii through its upgraded fiber network. Moreover, the deal will help the company deliver flexible data, video, voice and IP solutions with enhanced network coverage and broadband speed to customers, primarily based in Ohio, Indiana and Kentucky. The transaction is likely to fuel Cincinnati Bell’s growth with a positive cash flow.

Cincinnati Bell’s efforts to evolve from a legacy copper-based telecommunications company to an IT company with contemporary fiber assets, offering seamless network solutions to both consumer and business customers, are remarkable. Its move to prioritize customer satisfaction, followed by the creation of job opportunities, augurs well for the region’s economic development.

Notably, the company’s investment in fiber supports the growing IoT trend, which entails higher usage of broadband connections and smart-home devices. Reinforced with the claim of future-proofing 50% of its network services, Cincinnati Bell is undergoing a drastic transformation to upgrade its network infrastructure to next-gen fiber. This will support the burgeoning demand for data and accelerate 5G mobile technology growth.

Driven by diligent execution of its operations, the stock has rallied 39.3% against the industry’s decline of 35.4% in the past year. 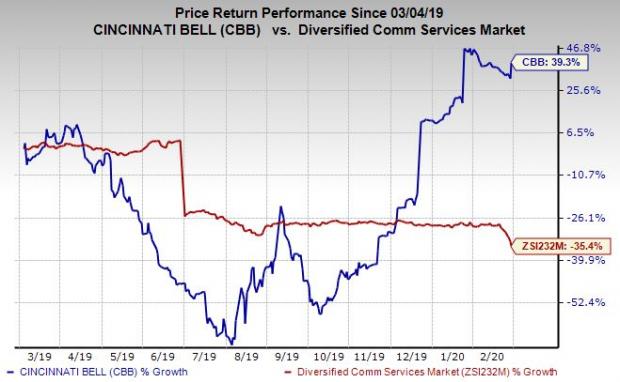 Some better-ranked stocks in the broader industry are Just Energy Group Inc. JE and AquaVenture Holdings Limited , each sporting a Zacks Rank #1 (Strong Buy). You can see the complete list of today’s Zacks #1 Rank stocks here.

4 Top Stocks to Win Big From the Coronavirus Pandemic