What's in Store for Axsome (AXSM) This Earnings Season?

At fourth-quarter 2019 earnings conference, we expect investors to focus on Axsome Therapeutics, Inc.’s (AXSM - Free Report) updates regarding the studies of its pipeline candidates, which are being developed for the management of central nervous system (CNS) disorders.

The company’s performance over the trailing four quarters has been dismal with its earnings having surpassed expectations only once while missing the same in the remaining three. The average trailing four-quarter miss is 17.26%.

In the last reported quarter, Axsome witnessed a negative surprise of 36.59%.

Shares of Axsome have skyrocketed 863% in the past year against the industry’s 11.5% decrease. 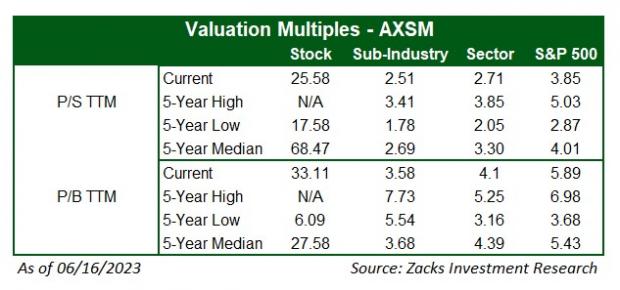 Axsome’s portfolio is currently devoid of any approved product. As a result, the company is yet to generate any revenues from the same.

Investors will be keen to get an update on the company’s CNS pipeline candidates, which include AXS-05, AXS-07, AXS-09, AXS-12 and AXS-14, currently being developed for multiple indications.

Notably, in December 2019, AXS-05 met the primary endpoint and significantly improved symptoms of depression in the phase III GEMINI study on major depressive disorder (MDD). The candidate is also being evaluated in the phase II/III ADVANCE-1 study on agitation associated with Alzheimer's disease (AD). Axsome completed a phase II ASCEND study on MDD and a phase II study on smoking cessation.

Per the company, positive results from the GEMINI study on MDD along with its previously completed ASCEND study will be sufficient to support the filing of a new drug application (NDA) for AXS-05 to treat MDD. The NDA is expected to be filed in the second half of 2020.

Meanwhile, in January this year, Axsome also completed patient randomization in the phase III STRIDE-1 study on AXS-05 to address patients with treatment resistant depression (TRD). Top-line data from the same is expected in the first quarter of 2020.

We expect management to provide a detailed update on the above candidates during the upcoming conference call.

Our proven model does not conclusively predict an earnings beat for Axsome this season. The right combination of a positive Earnings ESP and a Zacks Rank #1 (Strong Buy), 2 (Buy) or 3 (Hold) increases the odds of a positive surprise. But this is not the case here. You can uncover the best stocks to buy or sell before they're reported with our Earnings ESP Filter.

Earnings ESP: Axsome has an Earnings ESP of 0.00% as both the Zacks Consensus Estimate and the Most Accurate Estimate are pegged at a loss of 51 cents per share.

Here are a few healthcare stocks worth considering as our model shows that these have the right mix of elements to beat estimates this time around.

ChemoCentryx, Inc. (CCXI - Free Report) has an Earnings ESP of +14.18% and a Zacks Rank of 3. You can see the complete list of today’s Zacks #1 Rank stocks here.