MorphoSys BLA for Cancer Drug Gets Priority Review from FDA

Tafasitamab is the company’s experimental anti-CD19 antibody, which is being evaluated in combination with Revlimid for the treatment of relapsed or refractory diffuse large B cell lymphoma (r/r DLBCL).

The BLA was submitted at the end of last year. The FDA has set a Prescription Drug User Fee Act (PDUFA) goal date of Aug 30, 2020.

The FDA has informed the company that they are not currently planning to hold an advisory committee meeting to discuss the application.

The BLA was submitted based on the primary analysis data from the L-MIND trial of tafasitamab in combination with Bristol Myers’ BMY Revlimid in patients with r/r DLBCL and the retrospective observational matched control cohort of Re-MIND, evaluating efficacy outcomes of r/r DLBCL patients who received lenalidomide monotherapy.

We note that Priority Review is granted to therapies that the FDA determines to have the potential to provide significant improvements in the treatment, diagnosis or prevention of serious conditions. This designation shortens the review period to six months compared to 10 months of standard review.

The above-mentioned combination was granted Breakthrough Therapy designation by the FDA in r/r DLBCL in 2017.

In 2010, MorphoSys licensed exclusive worldwide rights to develop and commercialize tafasitamab from Xencor, Inc. XNCR. Per the terms of the collaboration and licensing agreement, the FDA acceptance of the BLA of tafasitamab triggers an undisclosed milestone payment to be received by Xencor from MorphoSys.

A potential approval will boost growth prospects of this clinical-stage biopharmaceutical company, which primarily focuses on cancer treatments.

The company’s shares have gained 0.8% in the past year against the industry’s decline of 11.5%. 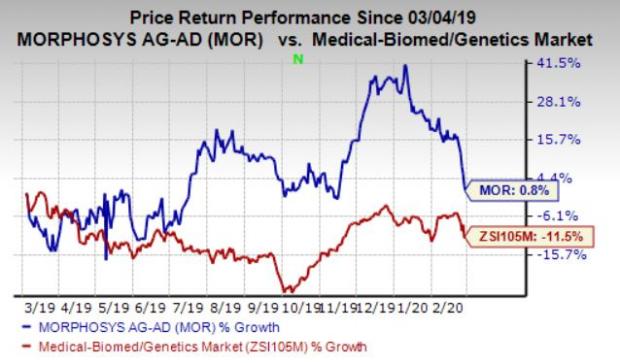 Tafasitamab is being evaluated as a therapeutic option in B cell malignancies in several ongoing combination trials. The ongoing phase III study, B-MIND, assesses the combination of tafasitamab and bendamustine versus rituximab and bendamustine in r/r DLBCL. Additionally, tafasitamab is currently being evaluated in patients with relapsed/refractory CLL/SLL after discontinuation of a prior Bruton tyrosine kinase inhibitor therapy (e.g. Imbruvica) in combination with Zydelig or Venclexta.

Competition is stiff in this space from the likes of other approved drugs like Revlimid and other therapies.

A better-ranked stock in the healthcare sector is Regeneron Pharmaceuticals REGN, currently sporting a Zacks Rank #1 (Strong Buy). You can see the complete list of today’s Zacks #1 Rank stocks here.