Allison Transmission’s (ALSN - Free Report) acquisitions, including the buyout of Walker Die and C&R Tool, bode well for growth. The firm is accelerating the pace of development of products that cater to electrification and fuel-cell markets for commercial vehicles. However, declining demand for hydraulic fracturing applications in the North America Off-Highway end market is likely to dent the firm’s margins in the upcoming period. Shares of the company have depreciated 14.1% in the past year compared with the industry’s decline of 12.5%. 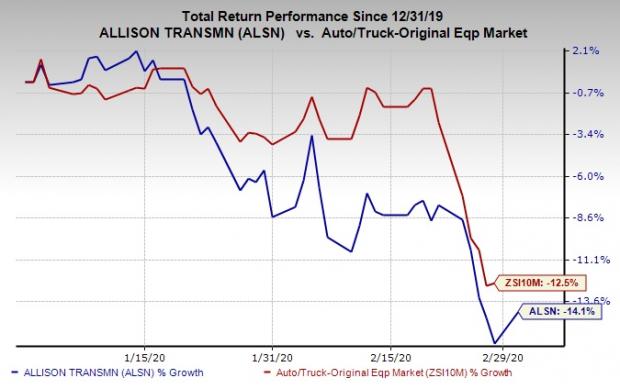 Allison is the largest manufacturer of fully-automatic transmissions for medium- and heavy-duty commercial vehicles. Notably, the company holds approximately 60% of the total market share on a global basis. It has a strong and diversified presence in North America. In addition, the company is focusing on boosting its footprint in emerging and under-served markets.

While higher tracked vehicle demand in 2020 is expected to drive net sales in the Defense end market, aluminum dye casting component volume associated with the Walker dye casting acquisition is likely to aid Service Parts, Support Equipment & Other end market revenues. The Defense, and Service Parts, Support Equipment & Other end markets are anticipated to be up 13% and 4% year over year, respectively this year.

Allison has been making efforts to trim costs through operational efficiency. Moreover, improved operating efficiency is expected to not only reduce SG&A expenses but also help the company invest in acquisitions, and product and technology development strategies, in addition to rewarding its shareholders. The firm's ROE of 83.12% is higher than the industry's 22.74%, indicating management's efficiency in rewarding shareholders.

The firm’s recent acquisitions, including the buyout of Walker Die and C&R Tool, bode well for growth. Allison recently increased the rate of product development for commercial vehicles in the electrification and fuel-cell markets. In this regard, the firm announced acquisitions of Vantage Power and AxleTech’s electric vehicle systems division in 2019.

Allison has been bearing the brunt of rising research and development costs. It expects costs to soar in the upcoming quarters, in turn, eroding margins. The company incurred engineering R&D expenses of $154 million in 2019 compared with the prior year’s $131 million. The company’s high leverage is also a cause of concern. Its debt-to-capital ratio stands at 76.33%, which restricts the firm’s financial flexibility.

All automakers are drifting toward the global shift to electric vehicles. Allison is also developing hybrid and electrification products for commercial customers. However, weak product line, increased product initiatives spending, uncertainties about timing and scope of product development are a few concerns for the company.

LCI has an estimated earnings growth rate of 20.72% for the ongoing year. The company’s shares have gained 22.7% in a year’s time.

Adient has a projected earnings growth rate of 17.79% for the current year. The company’s shares have appreciated 23.4% over the past year.