Plug Power (PLUG) to Report Q4 Earnings: What to Expect?

In the past three months, shares of the company have gained 32.1% against the industry’s decline of 6.2%. 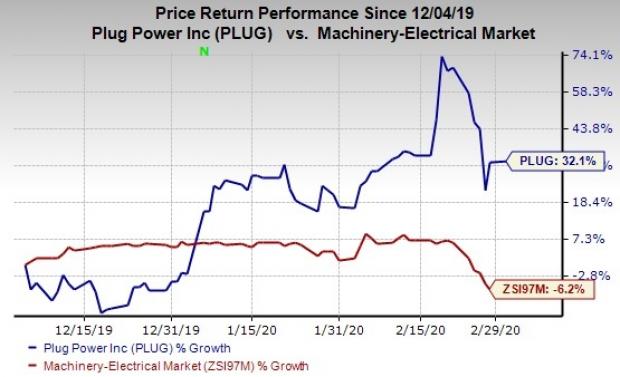 The growing popularity of fuel cell engines and hydrogen stations has been benefiting Plug Power over time. This is expected to have contributed to top-line performance in the fourth quarter of 2019. The company’s major product offerings include GenDrive fuel cell systems and ProGen fuel cell engine.

Also, healthy demand from material handling, on-road and stationary markets as well as technological advancements, and efforts to build additional capacity and strengthen sales channels might have been beneficial.

Further, the company’s partnership with ENGIE (signed in the third quarter) might have positively impacted the hydrogen fuel cell business in the quarter.

Plug Power anticipates record gross billings of $93-$95 million for the fourth quarter. Notably, gross billings were just $61 million in the third quarter of 2019. Also, GenDrives deployment will likely be 2,500 in the quarter.

The Zacks Consensus Estimate for fourth-quarter loss per share is pegged at 6 cents, indicating an improvement from a loss per share of 8 cents recorded in the fourth quarter of 2018. However, the consensus estimate for revenues of $90 million suggests a 50% increase from the prior-year reported figure.

Our proven model doesn’t conclusively predict an earnings beat for Plug Power this time around. The combination of a positive Earnings ESP and a Zacks Rank #1 (Strong Buy), 2 (Buy) or 3 (Hold) increases the odds of beating estimates. But that’s not the case here. You can uncover the best stocks to buy or sell before they’re reported with our Earnings ESP Filter.

Earnings ESP: Plug Power has an Earnings ESP of 0.00% as both the Most Accurate Estimate and the Zacks Consensus Estimate are pegged at loss per share of 6 cents.

Here are some stocks worth considering as our model shows that these have the right combination of elements to beat on earnings.

Syndax Pharmaceuticals, Inc. (SNDX - Free Report) has an Earnings ESP of +2.70%.  Currently, it is a Zacks #2 Ranked stock. You can see the complete list of today’s Zacks #1 Rank stocks here.

NGM Biopharmaceuticals, Inc. NGM presently has an Earnings ESP of +32.35% and a Zacks Rank of 3.

Frontier Communications Corporation FTR currently has an Earnings ESP of +41.50% and a Zacks Rank #3.