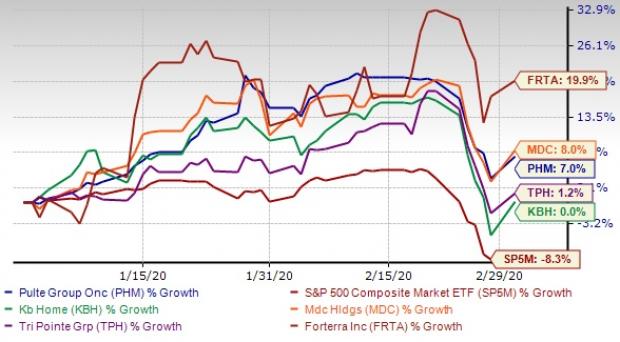 PulteGroup Inc. (PHM - Free Report) is eengaged in homebuilding and financial services businesses, primarily in the United States. The company has an expected earnings growth rate of 18.3% for the current year. The Zacks Consensus Estimate for the current year has improved by 1% over the past 30 days.

KB Home (KBH - Free Report) operates as a homebuilding company in the United States. It operates in four segments: West Coast, Southwest, Central and Southeast. The company has an expected earnings growth rate of 29.8% for the current year (ending November 2020). The Zacks Consensus Estimate for the current year has improved by 0.5% over the past 30 days.

M.D.C. Holdings Inc. (MDC - Free Report) is engaged in homebuilding and financial service businesses in the United States. The company has an expected earnings growth rate of 17.2% for the current year. The Zacks Consensus Estimate for the current year has improved by 2.8% over the past 30 days.