Technology sector has been resilient despite the coronavirus outbreak taking the shape of a pandemic. This is evident from the rebound in the stock market this week. Major indices like S&P 500 and Nasdaq surged 4.6% and 4.5% on Monday, respectively. Moreover, the Technology Select Sector SPDR Fund (XLK) has gained 2% on a year-to-date basis.

We note that Alphabet (GOOGL - Free Report) has been gaining investor confidence despite the coronavirus scare. Its self-driving project, Waymo, has recently raised $2.25 billion in funding from the outside investors including Silver Lake Management, Canada Pension Plan Investment Board and Magna International, for the first time.

The latest funding is likely to aid Alphabet in commercializing Waymo vehicles and consequently expand self-driving presence in to new areas.

Additionally, it is testament to the company’s strengthening efforts toward bolstering presence in the autonomous driving space, which as per a report from Allied Market Research is expected to witness a CAGR of 39.47% between 2019 and 2026 to reach $556.67 billion by 2026.

Given this upbeat scenario, tech companies like NVIDIA NVDA, Intel INTC, Cisco CSCO, Amazon AMZN, Yandex and Baidu BIDU are leaving no stone unturned to capitalize on prospects of the autonomous driving space. 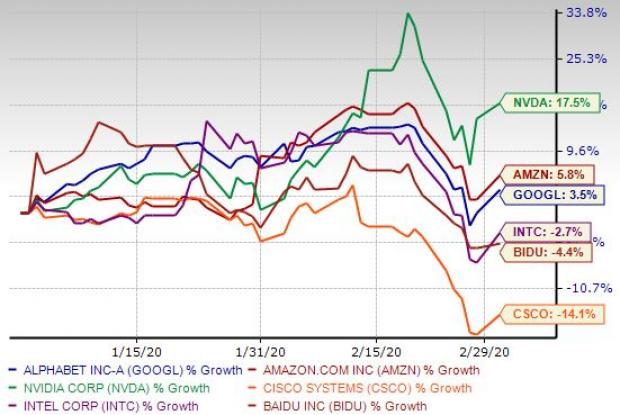 Alphabet has been aggressively strengthening Waymo initiatives, which are likely to help it in staying ahead of the curve. Moreover, it enjoys a first-mover advantage in the Level 4 Cars race.

Apart from the latest move, the company recently acquired Latent Logic, a British AI company that specializes in a form of machine learning namely imitation learning, which is expected to make simulation technology of Waymo more advanced and realistic. This, in turn, will strengthen the behavior prediction capability of Waymo.

Further, Waymo’s partnership with Lyft has helped it making some of its self-driving minivans available to the latter’s customers.

Additionally, Alphabet is merging its local delivery and long-haul trucking operations into a single business line called Waymo Via.

At CES 2020, this Zacks Rank #3 (Hold) company announced that Waymo vehicles have driven more than 20 million miles since its introduction in 2009. The feat was made possible courtesy of its innovative AI skills and deep learning techniques.

Alphabet’s growing self-driving initiatives are expected intensify competition against other tech majors working to eke out a niche in the autonomous driving space.

Baidu, which carries a Zacks Rank #3, has received license for five of its self-driving vehicles in China. Further, the launch of its Apollo Robotaxi fleet of 45 self-driving cars in Changsha, Hunan province in China, for trial operations in urban road environments, remains a major positive. Additionally, the company has teamed up with Volvo to launch Level 4 vehicles in 2021.

Amazon, a Zacks Rank #3 company, has invested in Aurora, a startup that develops technology to power fully autonomous vehicles.

Meanwhile, Yandex has invested $35 million in its self-driving program till date. Its autonomous vehicles have driven 2 million miles to date.

Further, the company is gearing up to offer autonomous taxi service to visitors of the June 2020 North American International Auto Show in Detroit. Notably, the service will offer a wide range of self-driving vehicles.

Further, at CES 2020, this Zacks Rank #2 (Buy) company broadcasted a video showing Mobileye navigating through streets of Jerusalem, with the help of 12 on-board cameras and no sensors. You can see the complete list of today’s Zacks #1 Rank (Strong Buy) stocks here.

Further, its partnership with Uber, Volkswagen and Baidu remains noteworthy in the autonomous driving space.

Meanwhile, Cisco, which carries a Zacks Rank #3, has recently joined forces with Oxbotica to enable seamless sharing of high-volume data in the autonomous vehicle space via its OpenRoaming that offers the ability to unlock solutions to the large data transfer challenge for autonomous vehicle fleets.