Sanofi SNY announced that the FDA has granted approval to Sarclisa (isatuximab-irfc) combination therapy for the treatment of adult patients with relapsed refractory multiple myeloma (RRMM) in the third-line setting. The drug received the nod in combination with Celgene [now part of Bristol-Myers BMY] Pomalyst (pomalidomide) and dexamethasone (pom-dex) for treating adults with RRMM having received at least two prior therapies including Revlimid (lenalidomide) and a proteasome inhibitor.

The approval was based on data from the randomized phase III ICARIA-MM study, which evaluated Sarclisa in combination with pom-dex for RRMM in the given patient population. The Sarclisa combination therapy demonstrated a statistically significant improvement in progression free survival (PFS) during the study.

Patients in the Sarclisa combo arm had a median PFS of 11.53 months compared to 6.47 months for those who received pom-dex alone. Sarclisa combination reduced the risk of disease progression or death by 40%. The combo regime also demonstrated a significantly greater overall response rate versus pom-dex alone.

Shares of Sanofi have rallied 14.7% in the past year against the industry’s decrease of 2.5%. 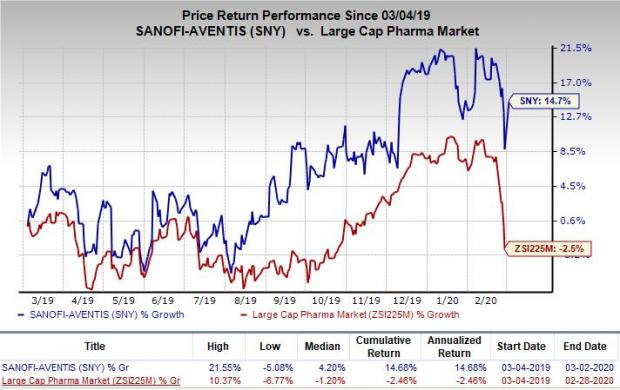 Notably, in July 2019, the FDA accepted for review the biologics license application (BLA) for Sarclisa. The regulatory body had set an action date of Apr 30, 2020. Hence, the approval comes almost two months ahead of the scheduled action date.

A regulatory application seeking approval of Sarclisa in combination with pom-dex for the treatment of certain patients with RRMM was also accepted for review in Europe during the second quarter of 2019.

We note that Sanofi’s portfolio has a promising cancer drug called Libtayo, approved in the United States in September 2018 and in the EU in July 2019 for the treatment of cutaneous squamous cell carcinoma. The drug is also being studied for multiple other cancer indications including the pivotal studies on lung, cervical and skin cancers.

Sanofi has a development and commercialization partnership agreement with Regeneron Pharmaceuticals REGN for Libtayo. For 2019, Sanofi’s oncology sales increased 8.3% at constant currency rate to €1.2 billion.

Sanofi currently carries a Zacks Rank #3 (Hold). A better-ranked stock in the large cap pharma sector is Pfizer Inc. PFE, which has a Zacks Rank #2 (Buy). You can see the complete list of today’s Zacks #1 Rank (Strong Buy) stocks here.

Pfizer’s earnings estimates have been revised 4.8% upward for 2020 over the past 60 days.