Broadcom AVGO shares have fallen in the last two weeks as part of the market-wide coronavirus selloff. The semiconductor maker, which recently landed another Apple AAPL contract, is set to report its Q1 fiscal 2020 results on March 12.

Let’s dive into why investors might want to consider buying Broadcom stock amid coronavirus concerns given its dividend, value, growth, and more.

Broadcom sells semiconductors that go into cellphones and networking equipment. More recently, AVGO expanded into infrastructure software solutions through acquisitions. This includes its roughly $19 billion purchase of CA Technologies, which it completed in November 2019, and more recently the acquisition of Syantec’s enterprise software unit.

The San Jose-based company posted stronger-than-projected Q4 2019 results in December. The firm also recorded record profitability in fiscal 2019, which included free cash flow of over $9 billion. On top of that, CEO Hock Tan said that its core semiconductor business was bottoming out and he expects the unit to return to growth in the second half of fiscal 2020.

This is part of what is projected to be a return to sales and earnings growth for the entire industry, from Nvidia NVDA to Intel INTC, after the historically cyclical semiconductor industry suffered a rough 2019.

Investors were also likely pleased to find out that Broadcom announced that it reached multiyear supply agreements with Apple that will see it provide wireless components into 2023.

Broadcom’s new three-and-a-half-year agreements come after the firm landed a separate deal last year to supply Apple with radio-frequency units. In total, AVGO said the deals with Apple could bring in up to $15 billion in revenue.

These deals help extend Broadcom’s on-going relationship with the global smartphone giant, especially at the time when Apple is trying to move more chip making in-house. 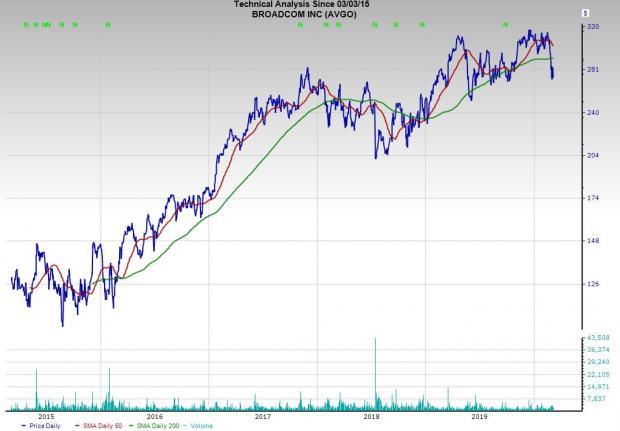 Broadcom has not been able to stay above the flood of selling. Broadcom stock closed trading on February 12 at $324.70 a share and had fallen to $310.75 by Feb. 18. This was the day after Apple warned Wall Street that it was likely to fall short of its sales guidance based on a downturn in China in terms of supply and demand.

Since then, the Dow, the S&P 500, and the Nasdaq have all plummeted into a correction as the coronavirus spreads outside of China into South Korea, Italy, and many other countries around the world, including the U.S. Stock selling and broader economic uncertainty seems poised to remain until the coronavirus impact is better understood.

With that said, investors are now on the hunt for bargains, even though the most prudent likely won’t load up until there are signs that the downturn is over. AVGO stock closed regular trading Tuesday down nearly 16% off its recent highs. This puts the stock at its October 2019 levels and below its 200-day moving average.

Broadcom is also currently trading at 14.2X forward 12-month Zacks earnings estimates. This marks a discount compared to its industry’s 15.5X average, as well as its own three-year highs of 18.7X and 14.9X median. Plus, AVGO’s industry currently sits in the top 13% of our more than 250 Zacks industries.

Our current Zacks estimates call for Broadcom’s Q1 fiscal 2020 revenue to pop 2.4% to $5.93 billion, with its adjusted earnings expected to slip 6% to $5.22 a share. Both estimates mark a downturn compared to the fourth quarter.

Peeking further ahead, AVGO’s full-year fiscal 2020 revenue is projected to jump 10.7% to $25.02 billion, which would top last year’s 8% sales expansion. Meanwhile, Broadcom’s adjusted earnings are expected to climb 8.8% in 2020.

Then, AVGO’s adjusted 2021 EPS figure is set to pop another 10% higher on nearly 6% stronger sales.

Broadcom is currently a Zacks Rank #2 (Buy) based on its solid earnings estimate revision activity. And the stock appears to be worth considering, though most investors might want to wait until after AVGO releases its Q1 financial results on Thursday, March 12 for any possible coronavirus updates.