However, the company provided a cautious view for the first quarter and fiscal 2020 on its strong year-over-year comparisons as well as the ongoing uncertain macro-economic, political and retail environments.

Additionally, Ross Stores stated that its guidance does not account for the potential impacts of the spread of coronavirus on its results. However, the company warned investors that the highly uncertain supply-chain disruptions in China might hurt its performance. Furthermore, it remains concerned about the negative effects on the U.S. consumer demand if the virus spreads.

Despite the strong results, shares of Ross Stores declined 3.2% in the after-hours session on Mar 3 as management warned that further spread of coronavirus might alter growth prospects. In the past three months, shares of the Zacks Rank #3 (Hold) company have declined 3.8% against the industry’s growth of 0.1%. 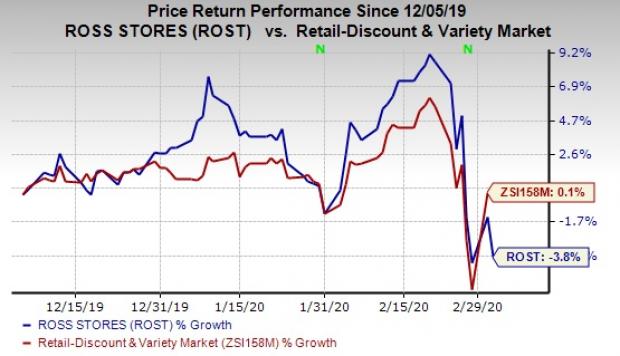 Ross Stores posted earnings of $1.28 per share, which beat the Zacks Consensus Estimate of $1.26 and surpassed the company’s guidance of $1.20-$1.25. Further, earnings grew 7% from $1.20 per share reported in the prior-year period.

Comps gained from strength in the children's category and the Midwest region. Also, sales trends in the ladies business continued to improve in the quarter. Further, the company benefited from strong customer response for merchandise in dd’s DISCOUNTS stores, which aided the top line and operating profit.

Cost of goods sold (“COGS”) rose 7.8% to $3,224.2 million. As a percentage of sales, COGS grew 30 basis points (bps) due to higher distribution expenses of 45 bps and a decline in merchandise margins of 5 bps, which were offset by lower buying costs of 10 bps, and leverage in freight and occupancy expenses of 5 bps each. Higher distribution costs were attributed to unfavorable timing of packaway-related expenses and higher wages. Meanwhile, merchandise margins were affected by some pressure from tariffs.

Selling, general and administrative expenses increased 4.5% to $601.9 million. As a percentage of sales, SG&A expenses decreased 40 bps on lower incentive bonus and other miscellaneous costs.

Operating margin of 13.3% expanded 10 bps and was slightly better than the company’s guidance of 13-13.2%. Operating margin primarily benefited from better merchandise margin and higher sales.

Concurrent to the earnings release, Ross Stores raised its quarterly dividend rate to 28.5 cents per share, reflecting a 12% increase from the prior rate of 25.5 cents. The raised dividend is payable Mar 31 to shareholders of record as of Mar 17.

The company expects a 4-5% increase in total sales for fiscal 2020, with comps growth of 1-2%. Operating margin is projected at 13-13.2%, whereas it reported 13.4% in fiscal 2019. The decline in operating margin mainly reflects ongoing pressure on merchandise gross margin due to tariffs and slight deleverage of expenses based on the comps growth outlook.  Moreover, the company estimates net interest income of $8 million for fiscal 2020, with a tax rate of 24%. It also projects capital expenditure of $730 million for the fiscal year.

For the first quarter of fiscal 2020, the company anticipates earnings per share of $1.16-$1.21, whereas it earned $1.15 in the year-ago period. The Zacks Consensus Estimates for first-quarter earnings is pegged at $1.24.

Moreover, the company expects a 4-5% improvement in total sales, with comps growth of 1-2%. It expects operating margin of 13.6-13.8%, whereas it reported 14.1% in the prior-year quarter. Moreover, the company estimates net interest income of $2 million for the fiscal first quarter, with a tax rate of 23%.

Costco Wholesale Corporation COST has a long-term earnings growth rate of 8.1% and a Zacks Rank #2.

Genesco Inc. GCO has a long-term earnings growth rate of 5% and a Zacks Rank #2.