With an aim to limit overdraft fees for customers, Wells Fargo & Company WFC has announced plans of launching two new bank accounts by early next year. The news came just a week before the company’s CEO is set to appear in front of the House Financial Services Committee.

Per the database provided by the Consumer Financial Protection Bureau, Wells Fargo has been receiving dozens of complaints related to overdraft fees since the beginning of this year. Moreover, since overdraft fees are generally only paid by those who have the least amount of money with them, it has been under scrutiny from regulators and politicians for many years now.

The accounts that the company intends to launch will likely offer convenient and secure banking services to customers with limited or no overdraft fees.

The first will be a checkless account, with a flat monthly fee of $5, and is expected to provide convenient features to customers at no additional cost. The account will limit spending to the amount available in the account and customers will not incur overdrafts or fees related to insufficient funds.

The second account will include checks. It will have a monthly service fee of $10 and will cap overdraft or fees related to insufficient funds at one per month. The account is primarily for those who want a limit on certain fees as well as protection on occasional overdrafts.

With the two new accounts, Wells Fargo wants to meet the needs of consumers, who are either opening an account for the first time and are new to banking or those seeking an account that will help them manage spending.

Once the accounts are launched, the company will proactively reach out to customers and educate them about the product and its features.

While the bank has taken this initiative, it has already tried to help customers avoid overdraft fees in the past.

In 2017, it tried to provide real-time balance alerts to customers whenever their accounts would fall to zero or less. Also, the bank stopped charging fees on accounts that were overdrawn by less than $5 and introduced an overdraft rewind feature that refunded fees charged when a covering direct deposit was received the next day.

However, troubles at Wells Fargo do not seem to end. It all started in September 2016, following the revelation of opening of millions of unauthorized accounts. Since then, the bank has settled numerous litigations and penalties. It has been slapped with new sanctions, including a cap on the asset position by the Federal Reserve. Disclosure of issues in its auto-insurance business, online bill pay services, and in the Wealth and Investment Management segments are also on the downside.

Recently, in a major setback, the U.S. CFPB director expressed her dissatisfaction with Wells Fargo's progress fixing its risk management issues. Also, the bank has announced to have entered into a $3 billion settlement with the authorities investigating its Community Bank sales practices.

Thus, in order to earn back the trust of customers, the bank has started to undertake such initiatives.

Over the past six months, shares of Wells Fargo have lost 14.9% against 1.4% rise recorded by the industry. 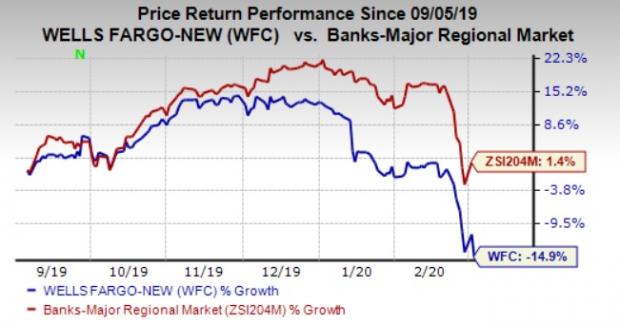 A few better-ranked stocks from the same space are mentioned below. Each of these stocks currently carries a Zacks Rank #2 (Buy). You can see the complete list of today’s Zacks #1 Rank (Strong Buy) stocks here.

JPMorgan’s JPM Zacks Consensus Estimate for current-year earnings has been revised upward by 2.8% over the past 60 days. Moreover, the stock has rallied 4.1% in the past six months.

State Street STT has witnessed an upward earnings estimate revision of 5.2% for the current year over the past 60 days. The company’s shares have gained 25.5% in the past six months.

The consensus estimate for earnings of Citigroup C has been revised 2.2% upward for the current year over the past 60 days. The stock has gained 3.4% over the past 12 months.