What's in the Offing for Franco-Nevada's (FNV) Q4 Earnings?

A Sneak Peek at Q3

The company has surpassed the Zacks Consensus Estimate in three of the trailing four quarters, the average positive surprise being 11.75%.

Franco-Nevada is likely to have benefited from the Cobre Panama project during the December-end quarter. The project commenced commercial production in September 2019 — a month earlier than expected. Hence, higher gold equivalent ounces (GEOs) from the project are expected to have bolstered the company’s performance in the quarter under review.

The company is also focused on generating higher revenues from its energy assets, driven by the Marcellus royalty acquisition and stellar performance of energy assets.

Gold prices increased during the October-December period, courtesy of the uncertainties related to the prolonged trade war, slowdown in manufacturing activity, concerns regarding global economic growth and the Fed’s rate cuts. Impact of rising gold prices and higher units of gold sold are likely to get reflected in Franco-Nevada’s quarterly results. Higher sales and lower costs are likely to have bolstered the to-be-reported quarter’s performance.

Our proven model does not conclusively predict an earnings beat for Franco-Nevada this season. The combination of a positive Earnings ESP and a Zacks Rank #1 (Strong Buy), 2 (Buy) or 3 (Hold) increases the odds of an earnings beat. But that is not the case here as you will see below.

Earnings ESP: The Earnings ESP for Franco-Nevada is -2.72%. This is because currently the Most Accurate Estimate and the Zacks Consensus Estimate are pegged at 48 cents and 49 cents, respectively.

Zacks Rank: The company currently carries a Zacks Rank of 2.

Franco-Nevada’s shares have gained 53% in the past year compared with the industry’s growth of 40.5%. 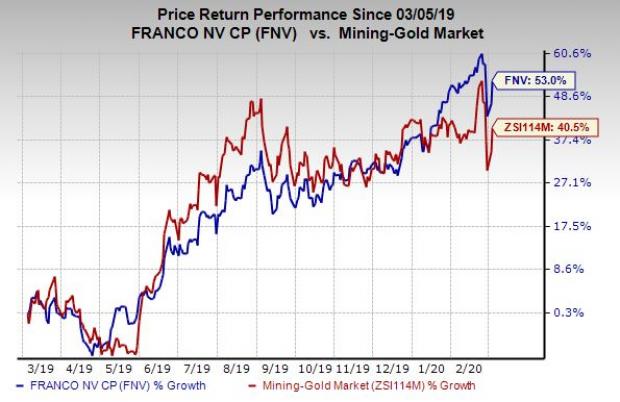 Here are a few stocks which you may consider as our model shows that these have the right combination of elements to post an earnings beat in their upcoming releases:

Silver Wheaton Corp (WPM - Free Report) has an Earnings ESP of +1.24% and carries a Zacks Rank of 2, currently.

Abercrombie & Fitch Co. (ANF - Free Report) currently carries a Zacks Rank of 3 and has an Earnings ESP of +0.12%.