Toyota Motor Corporation TM recently recalled 1.2 million vehicles, including trucks, SUVs, minivans and cars across the model line-ups of its namesake and Lexus brands in the United States, in order to fix fuel-pump issues. These vehicles have fuel pumps that can stop operating, causing the cars to stall, in turn, escalating the risk of a crash.

The company will replace the faulty fuel pump with an improved one, and aims to contact the affected vehicle owners by May 2020.

Shares of Toyota have outperformed the industry it belongs to. Its shares have appreciated 11.8%, as against the industry’s decline of 1%. 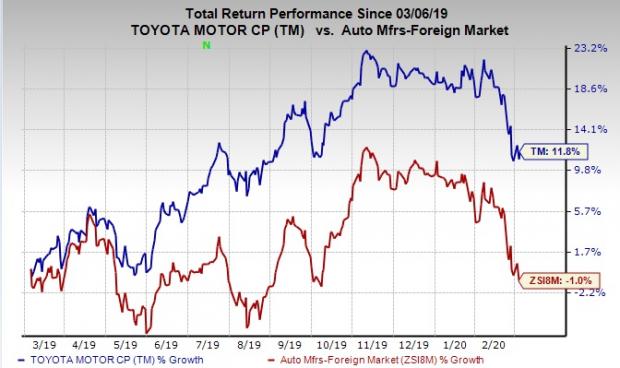 For the past few years, Toyota has been recalling vehicles in large numbers for various safety concerns. Frequent recalls not only affect the company’s reputation but also result in significant expenses and lower the vehicle-resale value. In the last few years, Toyota has paid huge fines due to safety defects in some vehicles, as well as to settle lawsuits.

LCI has an estimated earnings growth rate of 20.72% for the ongoing year. The company’s shares have gained 28.7% in a year’s time.

Adient has a projected earnings growth rate of 17.79% for the current year. The company’s shares have appreciated 31.5% over the past year.