Cincinnati Bell Inc. CBB has yet again announced an update regarding its much-awaited merger with Toronto-based conglomerate — Brookfield Infrastructure Partners L.P. BIP. The company has revised its merger agreement, increasing the cumulative value of the transaction to $2.8 billion, up from the previous valuation of $2.75 billion, including debt.

Interestingly, the companies have revised their merger agreement twice since the initial contract signing. Per the revised terms, Cincinnati Bell’s shareholders will be entitled to receive $13.50 in cash for each outstanding share compared with previous cash consideration of $12.50 per share. This revised transaction price is up a whopping 75% from the initial closing price of $7.72 on Dec 20, 2019. Markedly, the amendment is in tune with Macquarie Infrastructure and Real Assets’ unsolicited proposal to acquire Cincinnati Bell’s shares at $13.50 per share.

Consequently, after a lot of discussions, it was decided that the regional provider of communication services will ultimately resort to the original suitor. The deal, primarily aimed at reinforcing Cincinnati Bell’s augmented fiber network, is focused on maximizing the value of all stakeholders in the long run. As a result, it will not only provide an immediate thrust to its cash flow but will also augment its growth prospects in the days to come. Expected to close by the end of 2020, the transaction, which has been approved by the board of directors, is still subject to certain regulatory and shareholder approvals.

Cincinnati Bell’s efforts to evolve from a legacy copper-based telecommunications company to an IT company with contemporary fiber assets, offering seamless network solutions to both consumer and business customers, are remarkable. Its move to monetize investments, enhance shareholder returns and prioritize customer satisfaction, followed by the creation of job opportunities, augurs well for the region’s economic development.

Notably, the company’s investment in fiber supports the growing IoT trend, which entails higher usage of broadband connections and smart-home devices. Reinforced with the claim of future-proofing 50% of its network services, Cincinnati Bell is undergoing a drastic transformation to upgrade its network infrastructure to next-gen fiber. This will support the burgeoning demand for data and accelerate 5G mobile technology growth.

Cincinnati Bell has a long-term earnings growth expectation of 2%. Driven by diligent execution of its operations, the stock has rallied 67% against the industry’s decline of 31.7% in the past year. 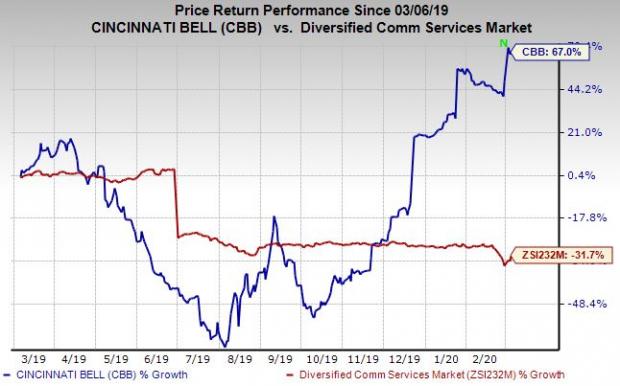 Duke Energy exceeded estimates in each of the trailing four quarters, the positive earnings surprise being 6.5%, on average.