That the rapid spread of the dreaded coronavirus (COVID-19) rattled stock markets globally is a well-known fact now. Having also gripped other parts of the world beyond China — its country of origin — this health hazard is speedily assuming pandemic proportions. Notably, this highly contagious disease severely affected countries like Italy, South Korea, Iran and Japan. It sounded the death knell for a considerable part of the global populace, having already claimed numerous lives apart from infecting many more,

While almost all sectors are reeling under its impact , the airline space has been one of the worst-hit pockets. The coronavirus spread foiled air-travel plans with many people unwilling to take to the skies in a bid to stay safe and avoid contracting the disease from a fellow passenger.

According to Alexandre de Juniac, director general and CEO of the International Air Transport Association (IATA), passenger traffic growth across the globe in January 2020 was the slowest in a decade. Notably, demand (measured in total revenue passenger kilometers or RPKs) climbed only 2.4% in the month on a year-over-year basis, signaling the lowest monthly increase since Apr 2010.

Overall capacity (available seat kilometers or ASKs) inched up 1.7% in the first month of this year. With traffic growth outpacing capacity expansion in the month, load factor (% of seats filled by passengers) rose 0.6 percentage points to 80.3%.

Understandably, the Asia-Pacific region (which includes China) witnessed a meager 0.4% year-over-year growth in demand in the period. Notably, in January, the viral attack was mostly restricted to China with the city of Wuhan in Hubei province surfacing as the epicenter of the disease. Additionally, demand for domestic travel in China was the worst, contracting 6.8% year over year in the same month.

Juniac termed the January traffic performance of airlines as the “tip of the iceberg’ as “major travel restrictions in China did not begin until Jan 23”. In the opening month of the ongoing year, the health scare was only confined to China and was still considered an epidemic.

With air-travel demand taking a beating from the fast-evolving coronavirus, airlines from all corners of the globe are trimming their capacity. For instance, American Airlines (AAL - Free Report)  suspended flights connecting Dallas with China, Hong Kong and Seoul due to lackluster demand following the coronavirus outbreak. The carrier also decided to call off all U.S. flights to Milan, Italy, again on account of this soft air-travel demand induced by the coronavirus. Fellow U.S. carriers, namely United Airlines (UAL - Free Report) and Delta Air Lines DAL also suspended multiple flights citing the same issue.

Latin American carrier LATAM Airlines LTM also cancelled its daily flight connecting Sao Paulo and Milan through Apr 16 because of tepid demand post the coronavirus outbreak. Moreover, the virus being rampant in Italy, two of the biggest players in the Italian market, namely, Ryanair Holdings RYAAY, which sports a Zacks Rank #1 (Strong Buy), and easyJet, took a massive hit from this health disaster.

Notably, Ryanair will cut 25% of its Italian capacity for the Mar 17-Apr 8 time frame. As a result of this anticipated decline in bookings, the carrier’s CEO Michael O'Leary warned of a "meaningful impact" of the virus on fourth-quarter fiscal 2020 (ending Mar 31, 2020) results. Also, Germany’s Deutsche Lufthansa DLAKY, which has exposure to Italy and China, reportedly decided to ground 150 of its planes due to weak demand following the virus outbreak.

The sorry state of affairs for airlines, as highlighted above, is well-reflected by the price performance of the Zacks Airline industry. In the past month, the industry has plunged 25.1% compared with the S&P 500 Index’s loss of 10%. 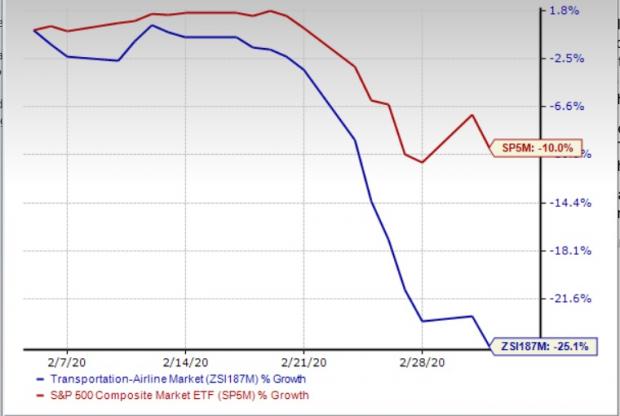 A slew of flight cancellations and dwindling air-travel demand (many carriers are ‘reporting 50% no-shows across several markets’ per IATA) point to a bleak near-term future for airlines. Consequently, the traffic performance, which touched rock bottom in a decade in January, is likely to deteriorate in the coming months. So it is not for nothing that the IATA currently expects airline revenues for 2020 to be hurt in excess of $29 billion. In fact, the projection may further worsen. Watch this space for more updates on the coronavirus onslaught and its resultant impact on the airline stocks.