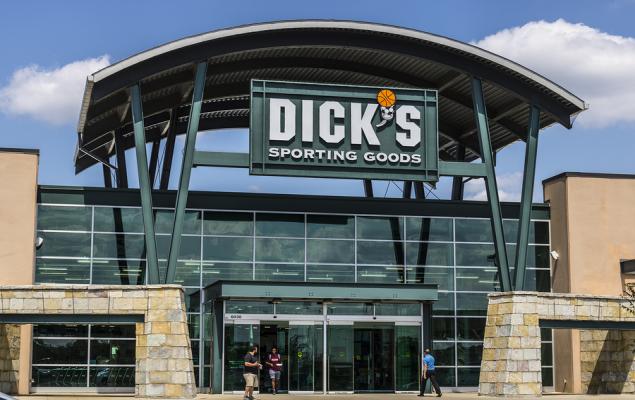 Here's How DICK'S Sporting (DKS) Looks Ahead of Q4 Earnings

DICK’S Sporting Goods Inc. (DKS - Free Report) is slated to report fourth-quarter fiscal 2019 results on Mar 10. The company’s earnings outpaced the Zacks Consensus Estimate by 36.8% in the preceding quarter. Moreover, the bottom line surpassed the consensus estimate by 11.5%, on average, in the trailing four quarters.

DICK’S Sporting is on the right track with the review of its hunting business and increased investments in core categories. Gains from these have been well-reflected in the quarterly performance of the athletic goods retailer.

Notably, DICK’S Sporting’s decision to remove the hunting category from its stores has contributed significantly to same-store sales (comps) growth. Though negative comps at the hunting business continued to hurt consolidated comps in the last reported quarter, the company offset most of the decline on growth across each of its primary categories — hardlines, apparel and footwear. Overall, stores that eliminated the hunting business have been delivering positive comps, in line with the rest of the chain. This has mostly resulted from the replacement of the hunting category with more compelling assortments in the stores.

We believe that exiting the low-margin hunting business is the right move as it has been helping growth of other higher-margin product categories, including apparel and footwear, and expanding its online offerings.

In addition to the elimination of the hunting category, the company’s growth story is supported by its space-reallocation efforts to differentiate its assortment. It has been efficiently reallocating floor space in stores, with growing categories and adapting products to meet the needs of each market. It has also been improving relations with its brand partners to provide the best athlete experience at its stores. The actions have not only been improving customer satisfaction and inventory turnover but have also been boosting merchandise margin rates for the company. Improved merchandise margin has been in turn contributing to gross margin expansion.

Further, the company has been on track to build the best omni-channel experience for athletes by strengthening the store network and expanding e-commerce presence. Its omni-channel investments have been focused on enhancing in-store experiences for athletes, improving e-commerce fulfillment capabilities, and developing technology solutions to boost athlete experience and employee productivity. Additionally, the company has been making efforts to improve digital marketing efforts by strengthening partnerships, which should bode well. Gains from the endeavors are likely to get reflected in the top-line number for the fiscal fourth quarter.

However, higher SG&A expenses, increased spending for business transformation and escalated fulfillment costs are threats to margins. Incremental tariffs on goods imported from China might have hurt profits.

Our proven model predicts an earnings beat for DICK’S Sporting this time around. The combination of a positive Earnings ESP and a Zacks Rank #1 (Strong Buy), 2 (Buy) or 3 (Hold) increases the chances of an earnings beat. You can uncover the best stocks to buy or sell before they’re reported with our Earnings ESP Filter.

Here are some other companies you may want to consider as our model shows that these too have the right combination of elements to post an earnings beat.

Rite Aid Corporation (RAD - Free Report) currently has an Earnings ESP of +33.33% and a Zacks Rank #1. You can see the complete list of today’s Zacks #1 Rank stocks here.