Shares of Aduro BioTech, Inc. ADRO were down 16.3% on Tuesday following its earnings release on Monday. In fact, the stock has plunged 37.1% in the past year compared to the industry’s decrease of 12.5%. 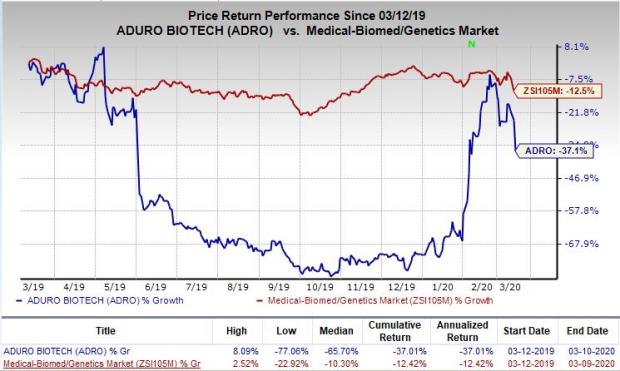 Aduro incurred fourth-quarter 2019 loss of 24 cents per share, wider than the Zacks Consensus Estimate of a loss of 21 cents but narrower than the year-ago loss of 33 cents.

Revenues of $3.6 million were up 31.7% year over year, primarily owing to ratalable recognition of an upfront payment received in 2019 under the collaboration with Eli Lilly LLY. Notably, in December 2018, Aduro entered into an exclusive collaboration and license agreement with pharma giant Eli Lilly to develop novel immunotherapies for autoimmune and other inflammatory diseases by leveraging its cGAS-STING inhibitor platform.

However, sales missed the Zacks Consensus Estimate of $5 million.

Research and development expenses declined 14.2% in the reported quarter to $15.1 million due to lower stock-based compensation and headcount costs resulting from the strategic reset in January 2019.

We remind investors that in January 2019, Aduro announced a strategic reset to focus primarily on the discovery and development of novel product candidates in the STING and APRIL pathways for the treatment of cancer, autoimmune and inflammatory diseases. Following this, the company reduced its workforce by almost 37%.

Moreover, in January 2020, Aduro announced a corporate restructuring to extend its operating capital and align personnel with the execution of clinical development strategy. As part of this, the company trimmed its current workforce by 51 employees across the organization and expects to shut down its Europe headquarters in Oss, The Netherlands by the end of third-quarter 2020.

General and administrative expenses were $9 million, flat year over year.

The company has a collaboration and license deal with Novartis NVS for developing ADU-S100. The candidate is being evaluated in a phase I study as a monotherapy in patients with cutaneously accessible metastatic solid tumors or lymphomas. Aduro is also conducting a phase Ib study to assess ADU-S100 in combination with Novartis’ anti-PD-1 monoclonal antibody spartalizumab for the same indication.

Further, the company is evaluating ADU-S100 in combination with Merck’s MRK anti-PD-1 therapy Keytruda (pembrolizumab) in a phase II study for the first-line treatment of recurrent or metastatic squamous cell carcinoma of the head and neck (SCCHN).