Apple vs. Microsoft Stock: Which is the Better Buy as the Dow's Bull Run Ends?

Microsoft MSFT and Apple AAPL both tumbled again Wednesday after the World Health Organization declared the coronavirus a pandemic. The two tech giants helped send The Dow Jones Industrial Average down 5.9% on the day, which officially put it in a bear market—a decline of at least 20% from its recent high.

The coronavirus has officially ended the Dow’s 11-year bull run. Now the question is should investors consider buying either Apple or Microsoft amid the coronavirus market selloff and ongoing volatility?

Despite the significant and quick declines, APPL and MSFT both closed regular trading Wednesday about where they were in the middle of December 2019, as the nearby chart shows.

MSFT came somewhat close to its 200-day moving average earlier this week, while AAPL still hovers further above that technical threshold. With that said, both stocks might still have plenty of room to fall, considering their insane runs and the ongoing spread of the coronavirus and the accompanying economic and market setbacks. 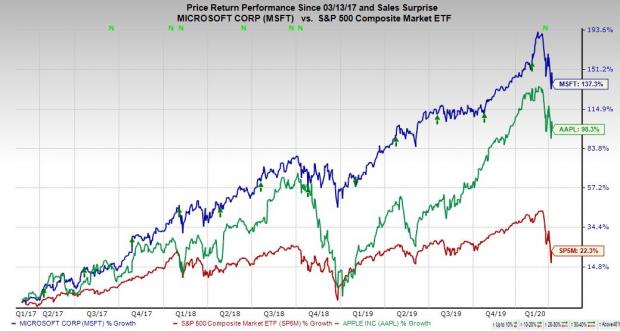 Before the coronavirus selloff began, many investors and analysts had grown concerned about sky-high valuations and figured a correction was due to hit the overheated market. Well, we got a correction and the end of the bull market at breakneck speeds.

AAPL is now trading at 4.3X forward 12-months Zacks sales estimates, down from its recent 10-year highs of 4.9X. Apple has traded as low 3.1X forward sales in the last 12 months and 2.4X in the last three years.

Meanwhile, Microsoft is trading at 7.9X forward 12-months Zacks sales estimates, down from its recent decade-long highs of 9.4X. MSFT has traded as low as 6.6X in the last year and 4.9X in the three years.

Apple was the first major firm to flash warning signs to Wall Street when it announced on Feb. 17 that it didn’t expect to meet its revenue guidance due to both supply and demand shortages in China.

Microsoft then lowered its More Personal Computing segment guidance. However, it said in its Feb. 26 statement that “all other components of our Q3 guidance remain unchanged.”

The company’s cloud computing unit, which isn’t really expected to be impacted by the virus, is set to drive sales for years to come. Our Zacks estimates call for Microsoft’s adjusted earnings to surge 18.3% and 12.6%, respectively in fiscal 2020 and 2021. MSFT’s revenue is set to jump 12.8% and 11.7% during this same stretch.

Moving on, Apple’s 2020 revenues are projected to jump 7.7% and another 10.6% in 2021. Meanwhile, its adjusted earnings are set to pop 14.2% and 17.1% in 2020 and 2021. Investors should also note that Apple returned to growth in its vital iPhone unit and analysts expect this fall’s iPhone 12 will feature some of its most game-changing updates in years.

On top of that, AAPL continues to expand its services and wearables segments. AAPL’s goal is to generate more revenue from its 1.5 billion active devices. And Apple Music, Disney DIS and Netflix NFLX-challenger Apple TV+, its app store, news service, and others will likely drive this expansion.

Like MSFT, Apple has seen some negative revisions in the last month. But its longer-term consensus estimates remain far above where they were before it reported its Q1 2020 results in late January. This helps Apple earn a Zacks Rank #2 (Buy) at the moment, while its dividend yield sits at 1.12%.

Cleary, Apple and Microsoft both appear to be great long-term buys, even though their stocks could continue to fall amid ongoing coronavirus uncertainty. Three simple facts remain: both companies will continue to buy back stock, pay dividends, and grow for years to come.

At the moment, MSFT might be the better choice given that its cloud segment isn’t as exposed to China as Apple’s key iPhone unit is for both supply and demand.

But the coronavirus won’t be around forever. And the further AAPL and MSFT stocks fall, the better the buying opportunities get for these two tech titans.

In the end, if you don’t own Apple or Microsoft already, or if you have already sold, seeing their stocks drop another 10% to 15% or more would create fantastic buying opportunities.