The market’s 11-year bull run is over, after the Dow, the S&P 500, and the Nasdaq all tumbled again Thursday. This downturn came the day after the World Health Organization declared the coronavirus a pandemic and President Trump announced a 30-day ban on some travel from Europe into the U.S.

Despite all the fears, should investors think about buying AT&T (T - Free Report) stock amid the downturn, given its solid dividend, buybacks, and plans for the future?

Along with the travel restrictions, Trump announced that the U.S. government is taking emergency action “to ensure that working Americans impacted by the virus can stay home without fear of financial hardship.”

Meanwhile, more states and cities are declaring states of emergency. Plus, the NBA abruptly suspended its season Wednesday, as large gatherings are canceled, suspended, or postponed to try to curb the spread of the novel coronavirus.

All three major U.S. indexes plummeted roughly 9.5% Thursday, after falling further late in the day—the Dow dropped 10%, for its worst day since 1987. This pushed the S&P 500 and the Nasdaq into bear market territory, joining the Dow, which saw its bull run come to an end Wednesday. Markets are now down well over 20% from their recent highs, and they got there at lightspeed. 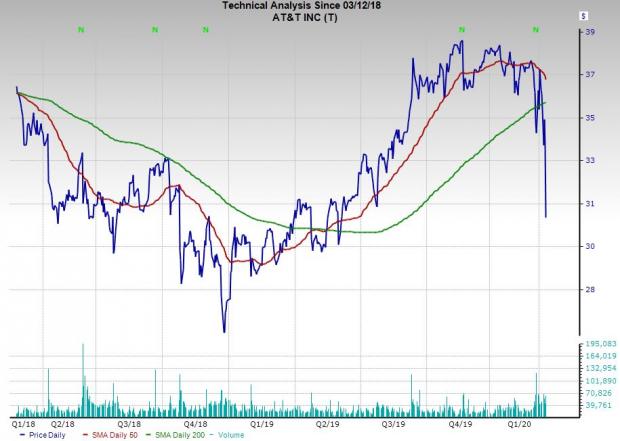 Investors should also remember that in late October 2019 AT&T reached a deal with activist investor Elliott Management to commit to further cost-cutting measures and stock buybacks, as it continues to pay down debt. On March 10, AT&T’s CFO John Stephens updated shareholders about everything from buybacks to the novel coronavirus.

The company said that under each of the two outstanding accelerated share repurchase agreements, AT&T will retire $4 billion of its common stock. “Depending on market conditions, the two ASRs, combined with open market repurchases, are expected to bring total common shares retired in 2020 to more than 250 million through April.”

AT&T’s CFO also signaled that the company doesn’t expect to be significantly impacted by the coronavirus. Stephens noted that while he “can’t speak on behalf of any specific supplier, the company hasn’t seen a significant impact in its supply chain at this point.” This stood somewhat in contrast to comments made by COO John Stankey earlier in the month.

Wall Street had rewarded AT&T for its commitments to securing its post-cable, streaming future and its pivot to cost cutting. The stock climbed from late 2018 until hitting its 52-week highs of nearly $40 a share in November 2019. Shares of AT&T then moved mostly sideways, until the market selloff began.

Shares are now down roughly 20% in the last month and have tumbled well below their 200-day moving average. AT&T stock closed regular Thursday not too far off its 52-week lows at $31.33 a share. Clearly, there could be more room to fall, but that would mean testing December 2018’s five-year lows of around $28.50 a share.

The recent downturn has boosted AT&T’s dividend yield to 6.6%. This easily tops Verizon’s 4.8% and is one of the stronger yields among tech/telecom firms.

AT&T also boasts “B” grades for Value, Growth, and Momentum in our Style Scores system. AT&T is currently trading at 1.3X forward 12-month sales estimates, which is far below its 52-week highs of 1.6X.

AT&T is currently a Zacks Rank #3 (Hold) based on its mixed earnings estimate revision activity. And clearly stocks might continue to fall, or at least remain volatile amid the ongoing uncertainty surrounding the coronavirus.

With all that said, given AT&T’s dividend yield, buyback efforts, and its streaming TV and 5G future, it appears to be a stock that investors might want to consider buying or at least putting on their watchlists.

What I'm Doing In The Stock Market Today