Coronavirus May Hit United Airlines March Revenues by $1.5B

United Airlines Holdings (UAL - Free Report) has provided an update on how deeply coronavirus is impacting its business, as the health crisis intensifies across the globe, including the United States, forcing the state and local governments to shut down schools and restricting people to their homes. Amid this turmoil, President Donald Trump announced fresh travel restrictions to the United Kingdom and Ireland over the last weekend.

With a significant decline in travel demand as hesitant customers are avoiding air travel and following large-scale travel restrictions, the carrier transported more than one million fewer customers in just the first two weeks of March compared with the year-ago period, especially given that March is usually its busiest time of the year. As a result, the Chicago, IL-based airline expects March revenues to be down $1.5 billion year over year. In fact, the carrier anticipates the number of customers and revenues to decline sharply going forward.

To mitigate the effects of the adversities, United Airlines is planning to reduce payroll expenses. To this end, the company will be slashing corporate officers' salaries by 50%. Additionally, the airline will cut back capacity for April and May by 50%. The capacity reductions are expected to extend into the summer travel period. Despite the significant reduction in capacity, the airline expects load factor (percentage of seats filled by passengers) to fall in the 20-30% range, assuming things to worsen in the future.

In addition to significant schedule reductions, the airline previously took measures such as freezing hiring (except for crucial roles), delaying 2019 merit salary increases, and giving employees the option to apply for voluntary, unpaid leave of absence to counteract the demand slump.

Due to setback from coronavirus-induced low demand, shares of United Airlines have plunged 52.4% since the beginning of February compared with the industry’s 37.7% decline. 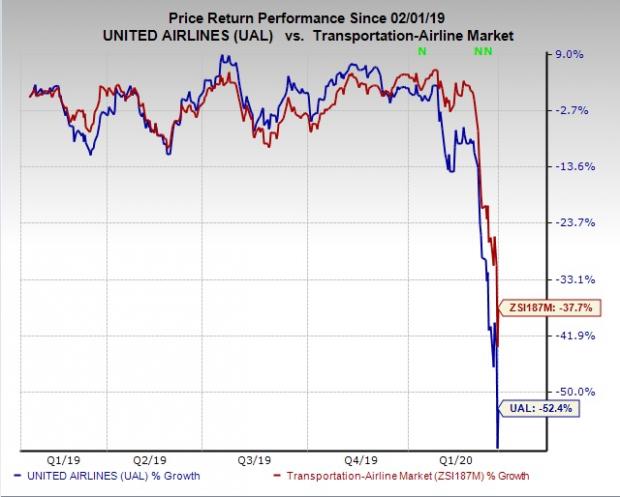 Each of the stocks has an impressive earnings history. Azul’s earnings surpassed estimates in the preceding four quarters, with the average being 209%. Ryanair trumped the Zacks Consensus Estimate in three of the last four quarters and missed the same once, with the average positive surprise being 56.3%. GATX’s earnings also outperformed the Zacks Consensus Estimate in each of the trailing four quarters, with an average of 21%.