On the non-earnings front, coronavirus-related updates continue to dominate headlines as airline operations are being crippled due to the sharp drop in air-travel demand. To stay afloat, US airlines sought federal help to the tune of more than $50 billion (through loans, grants and tax relief), per to Airlines for America (A4A). The amount sought is more than thrice the size of the bailout package post 9/11 terror attacks.

Notably, airlines are looking for assistance worth up to $25 billion via grants for passenger air carriers and $4 billion for cargo carriers to address the existing liquidity crunch. Moreover, a similar amount is being pursued by A4A in the form of unsecured loans/ loan guarantees. Also, a tax relief for the battered airlines is being sought. In addition, A4A is seeking tax relief for airlines (backdated to Jan 1, 2020).

Airlines, currently going through an enormous predicament, received a shot in the arm following President Donald Trump’s statement: “We’re going to back the airlines 100%, it’s not their fault, it’s nobody’s fault”.

In a bid to tackle the coronavirus-induced low demand, Azul decided to cut consolidated capacity in the 20-25% range for March. Moreover, capacity for April (and beyond until the situation normalizes) is anticipated to be trimmed in the 35- 50% band.  Also, all international flights except those departing from Campinas are cancelled. To handle this unparalleled crisis, Azul also announced measures (like deferring 2019 profit sharing and hiring freeze) to manage fixed costs.

2.  Due to the coronavirus crisis, United Airlines expects March revenues to be down $1.5 billion year over year. In fact, the carrier anticipates the number of customers and revenues to decline sharply going forward. To mitigate these adversities, United Airlines is planning to curtail payroll expenses. To this end, the company will be chopping 50% of corporate officers' salaries. Additionally, the airline will cut back capacity for April and May by 50%. (Read more: Coronavirus May Hit United Airlines March Revenues by $1.5B).

3. Delta will be slashing overall capacity by 40% in the next few months, the highest in its history including 2001 as air travel demand sees a rapid fall and revenues take a hit amid the fast-evolving coronavirus outbreak. The airline is witnessing a significant increase in cancellations with net bookings for travel being negative over the next four weeks. In fact, the carrier is seeing more ticket cancellations than bookings over the next month. (Read more: Delta to Cut Capacity by 40% Amid Rising Coronavirus Crisis).

4. Alaska Air Group’s ALK subsidiary Alaska Airlines aims to reduce capacity by a minimum 10% in April and 15% in May as the coronavirus threat is on the rise. Previously, on Mar 10, management stated that it expects to trim capacity by approximately 3% in May. Ever since, passenger demand has persistently declined with a significant rise in cancellations and extremely low new bookings. Further, the airline will keep track of demand and if required, will continue to lower capacity on a rolling 15-day basis. The carrier is also looking for additional borrowing of approximately $500 million. Like other airlines, it is also undertaking cost-containment measures.

Meanwhile, American Airlines aims to cut international flights by 75% to match the extremely-weak demand scenario. LATAM Airlines aims to slash 70% capacity due to this global health peril.  For April and May, Ryanair RYAAY, primary market of which is the badly-hit Italy, aims to trim capacity by up to 80%. In fact, the company intends to ground most of its aircraft in Europe over the next seven to 10 days.

5. Southwest Airlines LUV, which is witnessing a massive decline in passenger bookings and a significant rise in close-in trip cancellations for March and the second quarter of 2020, decided to reduce available seat miles (ASMs a measure of capacity) by at least 20% in the Apr 14-Jun 5 timeframe. These capacity cuts are in addition to the pre-existing schedule reductions due to the grounding of the 34 Boeing 737 MAX jets in its fleet. To tackle this unprecedented crisis, Southwest Airlines also announced measures (like implementing a hiring freeze) to control costs. The Dallas, TX-based low-cost airline will also suspend share buybacks upon completion of the current share repurchase authorization. 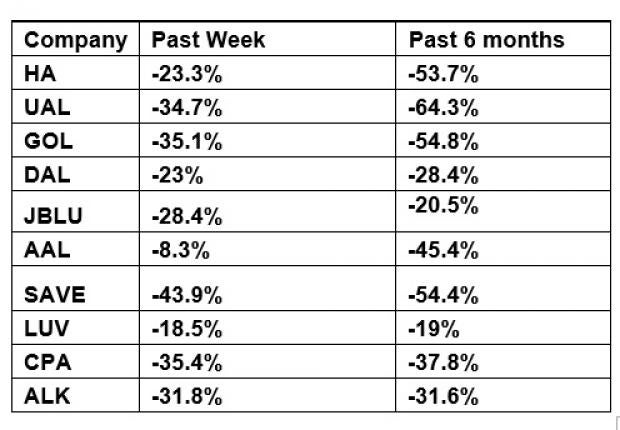 The table above shows that all stocks traded in the red over the past week due to the coronavirus-led bleak demand scenario. Consequently, the NYSE ARCA Airline Index has declined 29.7% over the past week. Over the course of six months, the sector tracker has plunged 36.8%.

Watch this space for further developments on the coronavirus and its resultant impact on the sector.