Apache Corporation’s APA stock has had a difficult movement since the start of the recent oil crash. A glance at the company’s price trend shows that its shares have lost 80.6% over the past month, wider than the industry’s decline of 57.8%. While the S&P 500 Index has dropped 29%.

However, many investors may view this sharp fall in the Houston, TX-based independent energy’s stock price as an opportunity to build a promising portfolio on the back of its strong fundamentals. As a matter of fact, if you still haven’t taken advantage of this price plunge, it’s time that you add the stock to your portfolio. The company looks an attractive investment choice, courtesy of an impressive earnings performance in 2019 and its robust production scale. 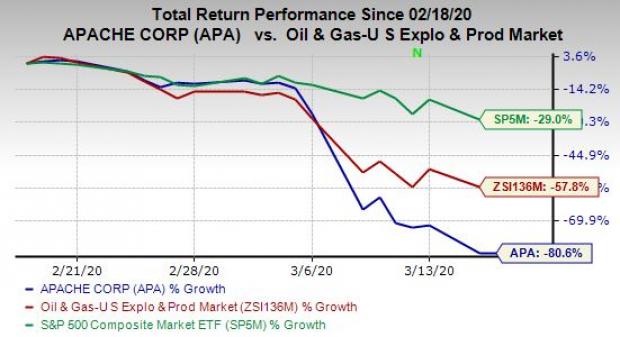 What Makes It an Attractive Pick?

Apache Corporation is one of the world's leading independent energy companies engaged in the exploration, development and production of natural gas, crude oil and natural gas liquids. The firm boasts a large geographically diversified reserve base with multi-year trends in reserve replacement. The company’s high-quality drilling inventory with greater resource potential should enable it to deliver competitive per share growth.

Of late, Apache along with its new partner TOTAL S.A. TOT announced a major oil discovery at the Maka Central-1 well in Block 58, offshore Suriname, following which the stock has risen more than 26% in the trading, scoring its biggest intraday gain since 1973.

The drilling results proved to be pleasing for both companies as the well confirmed ample traces of hydrocarbon within its bounds, mirroring high potential for productive oil wells. For Apache, this joint venture with TOTAL, which is one of the top five publicly-traded global integrated oil and gas players, will enormously enhance its portfolio with the addition of the latter’s extensive offshore expertise and global footprint.

Natural gas comprises 40% of the company’s total production volumes. With demand for clean energy rising, the focus is now on reducing greenhouse gas emissions. The company has significant natural gas volumes to keep pollution at bay.

Apache’s Permian foothold is also a positive when it comes to natural gas production. This is because among all the key producing plays in the United States, Permian records the largest daily natural gas volumes after Appalachia.

These major drivers strengthen Apache’s share value in the energy market, especially in the Permian Basin.

Analysts are bullish on the stock that has been witnessing solid upward estimate revisions. In the past 30 days, two estimates have moved north for Apache. The trend has been pretty favorable too with estimates moving from a loss of 4 cents a share 30 days ago to a profit of 3 cents today.

Apache reported fourth-quarter 2019 adjusted earnings per share of 8 cents. The Zacks Consensus Estimate was of a loss of 4 cents. The beat was driven by sturdy Permian production.

In the fourth quarter, Apache generated $778 million of cash from operating activities while it shelled out $590 million as capital expenditures for positive free cash flow.

As of Dec 31, this oil giant had approximately $247 million as cash and cash equivalents.

Apache’s earnings outpaced the Zacks Consensus Estimate in three of the trailing four quarters, the average beat being 119.68%.

We believe that these factors will continue to keep Apache in investors’ good books.