Microsoft (MSFT - Free Report) recently revealed a lot of details regarding the upcoming Xbox Seriex X gaming console, which is scheduled for a holiday 2020 release.

The console is equipped with Advanced Macro Devices' (AMD - Free Report) 7 nanometer (nm) technology based 8 core Zen 2 architecture CPU and an RDNA 2-class GPU. The company claims the processors provide the new console with “more than 4 times the performance of an Xbox One X.”

The company is extremely optimistic on its latest Hardware Accelerated DirectX Raytracing (DXR) capability, with which it expects to provide next-gen gamers with advanced immersive audio and visual experience.

The improved technical features, which will eventually lead to higher resolution and faster loading of the games, are expected to add to customer base.

We believe the new console is likely to help the company strengthen its competitive position in console gaming against peers like Sony (SNE - Free Report) , which is also gearing up for its upcoming console release, PlayStation 5 or PS5, with AMD-powered processors in the holiday season of 2020.

Microsoft is likely to gain traction in the console, PC and cloud gaming industry with the positive developments, which are instilling confidence in the stock. Notably, shares of the company have returned 19.4% in the past year, outperforming the industry’s rally of 2.6%. 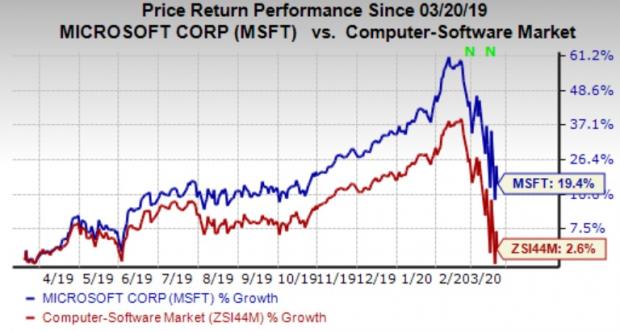 Moreover, Microsoft actively pursues acquisitions of game development studios to enhance its exclusive gaming content. We believe the buyouts will significantly expand the gamer base. The company is well poised to benefit from the operational efficiencies and the combined innovative skills. These factors are likely to bolster originality in its gaming content. Furthermore, the expanding game portfolio bodes well.

These growth projections strengthen optimism in Microsoft’s gaming initiatives across all devices and substantiate the company’s motto of ensuring “Gaming for all.”

The company is consistently integrating cloud capabilities of Azure into its gaming segment, which is facilitating it to enhance gaming strategies and improve content. We believe these developments will keep gaming revenues ticking in the days ahead.

Planet Fitness Shuts Down Stores Due to Coronavirus Outbreak