V.F. Corporation (VFC - Free Report) issued an update on the COVID-19 impact on its operations, given the growing uncertainty about the pandemic and its duration. To safeguard the company and its shareholders, management strengthened its cash position by drawing $1 billion from its revolving credit facility. It also withdrew the guidance for fiscal 2020.

During the third-quarter earnings call, the company anticipated revenues of $11.75 billion for fiscal 2020, which indicated growth of 5% from the year-ago quarter’s reported figure (and 7% in constant dollars, excluding the impact of acquisitions and divestitures). Adjusted earnings per share were forecasted to be $3.30, implying a15% improvement from the year-ago period’s reported figure (18% at constant currency). Adjusted gross and operating margins were envisioned to increase 80 bps and 90 bps to 54.1% and 13.8%, respectively, in fiscal 2020.

Further, the company announced $1-billion drawings on its current revolving credit facility. It had $2.25 billion under its revolving credit facility with an expiry date of December 2023. This move comes as a precautionary measure to contain the unprecedented impacts of COVID-19. This brings the total cash balance to $1.5 billion, which will be later utilized to fund its working capital requirements until the first half of fiscal 2021.

However, the company retained its commercial paper program, which will allow it to borrow up to $2.25 billion for short-term, seasonal working capital requirements and other corporate purposes.

Prior to this, V.F. Corp temporarily closed all retail stores along with corporate and brand offices across North America from Mar 16 till Apr 5 to contain the further spread of the novel coronavirus. The company has also shuttered all offices and stores in Europe until further notice. In the Asia Pacific too, most of its stores and offices have been closed. Meanwhile, its stores in the U.K. remain open but for limited hours.

Shares of this Zacks Rank #4 (Sell) company have slumped 53.5% in the past three months compared with the industry’s decline of 47.3%. You can see the complete list of today’s Zacks #1 Rank (Strong Buy) stocks here. 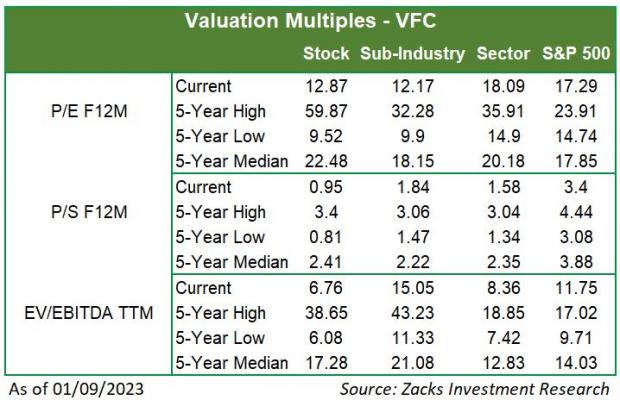 Aaron’s also withdrew its 2020 guidance in response to the ongoing COVID-19 outbreak and its unpredictable impacts. Further, management has drawn $300 million from its revolving credit facility to add to its cash balance.

Despite beginning the fiscal on a solid note, Ross Stores withdrew its top and bottom-line guidance for fiscal 2020 and the first quarter. Also, management has drawn $800 million from its revolving credit facility to add to its cash balance.

Best Buy withdrew its earlier announced guidance for the first quarter and fiscal 2021. Moreover, in order to strengthen its liquidity and financial flexibility during such tough times, the company drew a total amount of $1.25 billion under its revolving credit facility.