Here's Why You Should Hold on to Insulet (PODD) Stock Now

Insulet Corporation PODD has been progressing well with its strategies of expanding Omnipod’s market access and developing the Omnipod Horizon system. The company already seems to be on track to achieve revenues of $1 billion by 2021. However, a tough competitive landscape and macroeconomic uncertainties are likely to offset the positives to some extent.

The $9.04-billion commercial developer of insulin treatment expects a skyrocketing earnings growth rate of 164.3% for the next year. Also, the company has a trailing four-quarter positive earnings surprise of 101.4%, on average.

In the past six months, the stock has lost 4.6% compared with 33.1% decline of its industry

Advancement of U.S. Manufacturing Facility: Management seems to be particularly upbeat about the manufacturing unit in Acton, MA. Insulet expects that following the startup-related activities, the facility will allow it to lower manufacturing costs, increase supply redundancy, add capacity to meet the need of its North America customer base and support growth. Management expects to continue increasinginvestment in the facility in 2020 to support growth of its business. 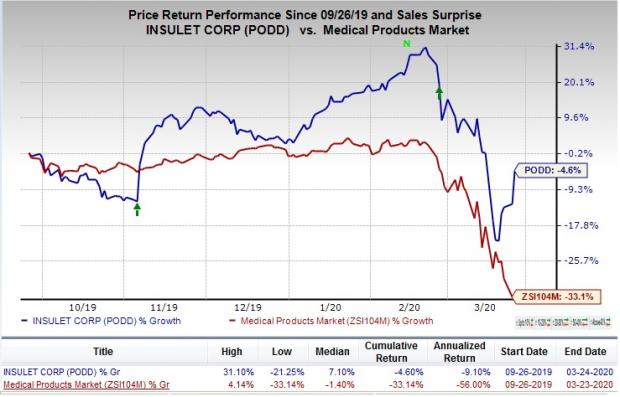 Omnipod’s Market Access Expansion: Insulet has been consistently benefitting from the full commercial launch of the Omnipod DASH system in the United States in early 2019. Subsequently, the company launched the Omnipod DASH system in select Europe markets in December 2019. Per the company, a record number of new users have adopted Omnipod in the United States since DASH’s launch. Insulet is on track to roll out the DASH system across Europe and Canada in 2020.

However, a few factors are deterring the company’s growth prospects.

Economic Uncertainty: Weaker global economic conditions, particularly due to the coronavirus outbreak, may deflate demand for Insulet’s products, increase competition, exert pressure on prices plus dent supply, and lengthen sales cycle. The company is also susceptible to the risk of reduction in healthcare spending in the United States, Canada and Europe due to an economic slump.

The Zacks Consensus Estimate for Insulet’s first-quarter 2020 revenues is pegged at $189.5 million, suggesting an 18.8% rise from the year-ago reported number.

However, the company is witnessing a negative estimate revision trend for 2020. Over the past 30 days, the Zacks Consensus Estimate for its earnings has declined 17.6% to 56 cents per share.

ResMed has a projected long-term earnings growth rate of 12%. It currently carries a Zacks Rank #2 (Buy). You can see the complete list of today’s Zacks #1 Rank (Strong Buy) stocks here.