Jazz Pharmaceuticals plc (JAZZ - Free Report) announced that the FDA has accepted the new drug application (“NDA”) seeking approval for JZP-258 as a treatment for cataplexy and excessive daytime sleepiness (“EDS”) associated with narcolepsy in patients seven years or older. The FDA has also granted priority review to the NDA and a decision is expected by Jul 21, 2020.

JZP-258 is a follow-on candidate of the company’s blockbuster sleep disorder drug, Xyrem. It is an oxybate product candidate with 92% less sodium content than Xyrem, which is also approved for cataplexy or EDS sleepiness associated with narcolepsy.

Jazz’s shares have declined 35.9% so far this year compared with the industry’s decrease of 26%. 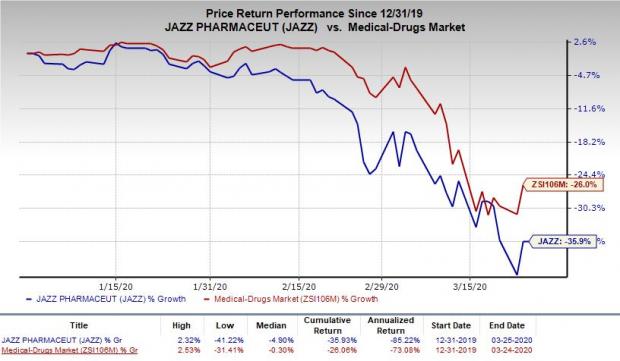 The NDA for JZP-258 was based on data from a late-stage study, which evaluated the candidate for change in weekly cataplexy attacks compared to a placebo. Study data showed that treatment with JZP-258 achieved highly statistically significant differences in the number of cataplexy attacks as well as in key secondary endpoint of change in Epworth Sleepiness Scale score versus placebo. The candidate demonstrated a safety profile similar to Xyrem.

The company’s strong sleep disorder portfolio has two FDA-approved drugs — Xyrem and Sunosi (solriamfetol). Xyrem, its key revenue generator, recorded full-year sales of $1.64 billion, representing year-over-year growth of 17% and constituting 76% of total revenues in 2019. The company expects total sales from Xyrem and JZP-258, following its potential launch, to be in the range of $1.71-$1.76 billion in 2020.

Meanwhile, Sunosi was launched in the United States for treating EDS in patients with narcolepsy (with or without cataplexy) or obstructive sleep apnea in July 2019. The drug generated nearly $3.7 million in sales in 2019.

Potential approval to JZP-258 will boost Jazz’s sleep disorder portfolio further as JZP-258 is likely to expand the eligible patient population for Jazz’s medicines. It will likely include patients ineligible for Xyrem as they are at risk of high sodium intake-related consequences, including hypertension and other cardiovascular diseases. The highest approved dose of Xyrem of 9 grams per night contains 1,640 mg of sodium, which is almost 70% of the recommended daily sodium intake for a healthy adult per an article published on FDA’s website.

Moreover, Xyrem is set to face generic competition as early as 2023. The low sodium content of JZP-258 and a similar safety profile are likely to largely offset the decline in Xyrem sales once generic versions enter the market.

Apart from sleep disorder, Jazz also has a few oncology drugs in its portfolio. The company is also expanding its cancer portfolio through internal development as well as signing partnerships.