Enphase Energy (ENPH - Free Report) recently extended its partnership with Rexel Group, which shall enable the former to distribute its solar products in both metro and regional Australia through the latter’s extensive electrical wholesale network. Notably, both companies already have similar partnerships in the United States and Europe.

A Brief Insight on the Agreement

The partnership expansion will be beneficial for Enphase in penetrating the Australian solar market, where Rexel operates through a nationwide network of 146 wholesale branches. Rexel will help Enphase distribute its IQ 7 and IQ 7+ microinverters as well as the full suite of Enphase IQ accessory products, including the Enphase Q Cable wire system and the Enphase Envoy communications gateway.

In recent times, the demand for solar energy in Australia has been increasing rapidly. Hence, the solar market in the country is witnessing considerable growth, of late.

Evidently, per a report by Mordor Intelligence, with the second-highest per-capita solar capacity achieved on a global scale, Australia increased annual solar installation by three times in 2018 compared to that in 2017.

Based on such robust installations, the Australian solar market bears significant growth opportunities in the days ahead. Per a report by Global Market Insights, the size for solar photovoltaic (PV) market in Australia for both residential and commercial sectors is estimated to exceed 5 million units by 2030, with more than 16 GW additions.

Such growth is likely to be driven by an expected surge in demand, mainly in residential applications, along with supportive government policies.

Such overwhelming projections offer robust growth opportunities for Enphase, which now can establish a stronghold in the Australian solar market through its latest partnership with Rexel.

Per a report by the International Renewable Energy Agency (IRENA), global electricity generation from solar energy is expected to increase to nearly 360 GW per year by 2050 from the current level of 109 GW.

Enphase Energy currently caters to a geographically-diverse customer base spread across key markets in the United States, Canada, Mexico, Central America, Europe, Australia, New Zealand, India and certain other Asian markets. At present, more than 1 million Enphase residential and commercial systems have been deployed across 130 countries.

Canadian Solar’s late-stage, utility-scale solar pipelines, including the ones under construction, increased to 3.4 GWp, as of the end of third-quarter 2019.

First Solar expects to increase its Series 6 manufacturing capacity to 6 GW by 2020 and 8 GW by 2021-end, given the growing global demand for solar modules.

In a year's time, shares of Enphase Energy have surged 318.3% compared with the industry’s 20% growth. 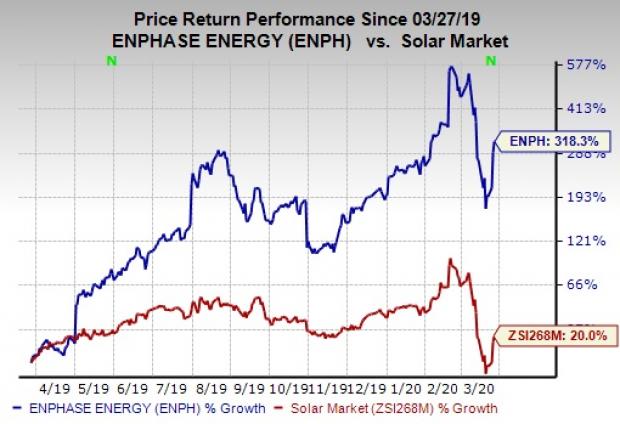 The company sports a Zacks Rank #1 (Strong Buy). You can see the complete list of today’s Zacks #1 Rank stocks here.