The Scotts Miracle-Gro Company SMG reported preliminary results for second-quarter fiscal 2020 (ending Mar 28, 2020). The company stated that the demand for its U.S. Consumer and Hawthorne businesses has witnessed a surge in recent weeks, particularly in edible gardening, professional growing and pest-control-focused categories.

Scotts Miracle-Gro expects company-wide sales to rise 16-17% year over year in the fiscal second quarter. Sales in the U.S. Consumer and Hawthorne units are expected to increase around 12% and at least 55% in the quarter, respectively.

In the U.S. Consumer division, the company has witnessed a sharp rise in demand in March, which is expected to boost consumer purchases by nearly 25% in the fiscal second quarter. Moreover, purchases of soil and insect control rose roughly 35% and 45% in March, respectively.

Per the company, the demand in all areas of the business increased in recent weeks. However, it remains cautious of potential challenges from a dramatic slowing of the economy in the coming weeks. Also, it has no liquidity concerns and is well-positioned to resume normal business operations once the crisis passes.

The company also noted that some capital expenditure may be delayed until the next year, while share repurchase activities have been suspended. While Scotts Miracle-Gro is not changing the full-year view at present, it has acknowledged potential risks to consumer purchases in the coming months. Also, it has not witnessed any significant disruptions so far, in terms of incoming supplies and raw material or delays in shipments to retailers and other customers. All of the major retail partners of the company are designated as essential services and have been remained open.

Scotts Miracle-Gro intends to announce its fiscal second-quarter results on May 6.

Shares of the company have gained 32.7% in the past year against the industry’s 39.7% decline. 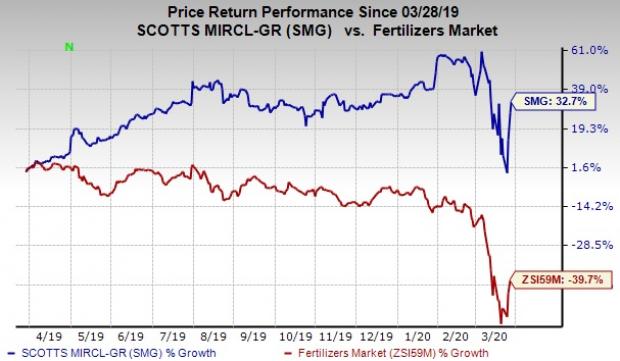 Newmont has an expected earnings growth rate of 72% for 2020. The company’s shares have gained 35.7% in the past year.