Per the agreement, which was initially announced last month, Elenion will provide its broad portfolio of highly integrated and cost-effective optical interfaces to Nokia. This will help Nokia to boost its core mobile business and address the rapidly evolving 5G-backed optical connectivity requirements in the global arena. Markedly, these optical interfaces, which can be easily incorporated into Nokia’s 5G and cloud ecosystem, are expected to accelerate the scale of its networking applications as the world moves closer to 5G evolution.

Impressively, Elenion, which is best known for its proprietary low-cost silicon photonics design platform, supports the integration of complex devices into a single chip. These chips, which are specifically designed to support high-performance optical interfaces, lower the average cost of production and streamline the supply chain operations of the technologically-driven optical chipsets. Apart from operational efficiency, it also minimizes power consumption, improves port density and lowers the cost of data transfer for network operators. However, financial terms of the deal have not yet been disclosed.

Currently, Nokia is focused on its strategy that centers on four priorities. The first priority is to lead in high-performance end-to-end networks with its communication service provider customers. The second priority is based on its relentless pursuit to expand network sales to select vertical markets, specifically energy, transportation, public sector, technical extra-large enterprises and webscale players. Building a strong standalone software business remains the third strategic priority. The fourth pillar aims to create new business and licensing opportunities in the consumer ecosystem.

The company’s end-to-end portfolio includes products and services for every part of a network, which are helping operators to enable key 5G capabilities such as network slicing, distributed cloud and industrial IoT. It facilitates customers to move from an economy-of-scale network operating model to demand-driven operations by offering easy programmability and automation. It is witnessing healthy underlying momentum in its focus areas of software and enterprise, which augurs well for its licensing business.

Notably, Nokia is expanding its business into targeted, high-growth and high-margin vertical markets to address several opportunities beyond its primary markets. It had earlier announced plans to accelerate strategy execution, sharpen customer focus and reduce long-term costs. This, in turn, should help the company to position itself as a global leader in the delivery of end-to-end 5G solutions. However, macroeconomic dynamics continue to take a toll on Nokia’s performance. Its Mobile Access business has been severely impacted by increased competition from arch-rivals, Ericsson (ERIC - Free Report) and Huawei, which are likely to create near-term pressure for the Finnish vendor.

Nokia’s shares have decreased 44.7% compared with the industry’s decline of 6.5% in the past year. The Zacks Rank #3 (Hold) stock topped earnings estimates twice in the trailing four quarters but missed the same in the remaining quarters, delivering a positive surprise of 87.5%, on average. 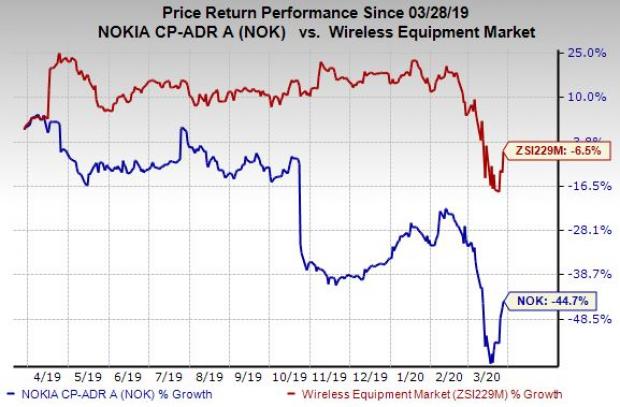 Telenav outpaced estimates twice in the trailing four quarters, the positive earnings surprise being 77.1%, on average.

Motorola outpaced estimates in the trailing four quarters, the positive earnings surprise being 6.6%, on average.