With the coronavirus pandemic wrecking the airline industry, federal help was sought by U.S. airlines to stay afloat. Carriers received positive news on that front over the past five trading days with the Senate passing an emergency relief package. Of the total amount worth $2 trillion, U.S. airlines are eligible to receive a total of $62 billion in loans as well as grants.

In another coronavirus-related update, Delta Air Lines DAL expects second-quarter 2020 revenues to be slashed by $10 billion, indicating an 80% decline from the year-ago reported figure. Moreover, Hawaiian Holdings’ HA subsidiary Hawaiian Airlines withdrew its first-quarter 2020 and full-year guidance due to waning travel demand as a result of the pandemic.

Additionally, Alaska Air Group’s ALK subsidiary Alaska Airlines announced plans to reduce capacity by 70% for April and May due to the coronavirus-induced low demand scenario. Notably, extremely low air-travel demand due to this hazard had prompted carriers to come up with a flurry of coronavirus-induced capacity-cut updates in the previous week too.

1. To combat the unprecedented coronavirus- led crisis, Delta has been taking several cost-reduction initiatives. To this end, the carrier plans to reduce capital expenditures by a minimum $2 billion this year. It is also offering voluntary short-term unpaid leaves, apart from freezing hiring. This Zacks Rank #3 (Hold) airline also suspended share repurchases and its board now voted to halt future dividend payouts as well. You can see the complete list of today’s Zacks #1 Rank (Strong Buy) stocks here.

3. Hawaiian Airlines trimmed its schedule for Neighbor Islands beginning Mar 25. This is in response to the quarantine order (effective Mar 26) from the Hawaii government asking travelers, who enter the state, to undergo a mandatory self-imposed quarantine of 14 days. The carrier will, however, continue to operate a network, essential for customers traveling within the state. The usual interisland cargo services will also be carried on.

4 To combat the coronavirus-induced crisis, the bill, recently passed in the Senate, offers airlines $62 billion as federal loans and direct cash grants to meet their payroll expenses. The mentioned amount includes $25 billion as monetary aid to passenger carriers and $3 billion to airline contractors apart from $4 billion to cargo haulers. A similar amount is earmarked through loans. Per treasury secretary Steven Mnuchin, the government will be a stakeholder in airline carriers in exchange of the massive grant.

5. The likes of Copa Holdings CPA and Avianca Holdings (AVH - Free Report) temporarily closed all passenger operations in the wake of the coronavirus crisis. Meanwhile, United Airlines now plans to reduce domestic capacity by 52% in April compared with 42% announced previously. With this revision, the airline’s total scheduled capacity cut for April will be 68% including 90% international capacity reduction.

The following table shows the price movement of major airline players over the past week and during the past 6 months. 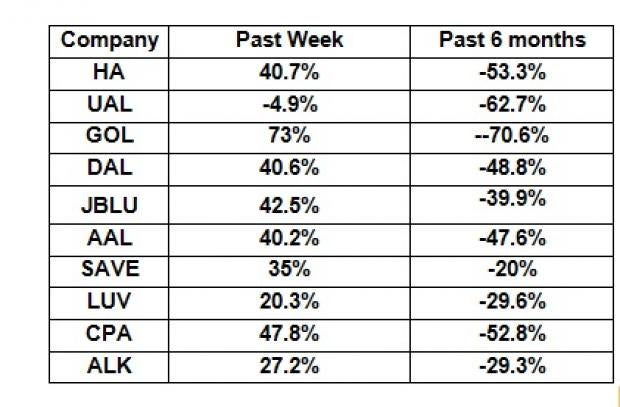 The table above shows that all airline stocks have traded in the green over the past week, resulting in the NYSE ARCA Airline index rallying 30% to $52.46. Enthusiasm pertaining to the stimulus package bumped up the stocks. Over the course of past six months, the NYSE ARCA Airline Index has depreciated 50.3%.

Further corona virus-related updates and its resultant impact on air travel will be awaited by investors.

Last year, it generated $24 billion in global revenues. By 2020, it's predicted to blast through the roof to $77.6 billion. Famed investor Mark Cuban says it will produce ""the world's first trillionaires,"" but that should still leave plenty of money for regular investors who make the right trades early..