Per the acquisition deal, Huntington Ingalls and Kongsberg Maritime will jointly supply naval and maritime products, and services to the U.S. government and potentially to global markets.

The autonomous underwater vehicle market has been witnessing significant growth, of late, which can primarily be attributed to the increasing number of deep-water offshore oil & gas production activities as well as rising maritime security threats. Thus, Huntington Ingalls, being a prominent player in maritime securities, seems to have acquired Hydroid in a bid to expand its footprint in the market.

In this context, it is imperative to mention that heightening competition has been constantly prompting defense industry majors to expand and diversify their product portfolio through small- and medium-sized acquisitions. As a result, we have witnessed a handful of significant mergers and acquisitions among defense players in recent times.

How Will the Deal Aid Huntington Ingalls?

With an inclusion in Huntington Ingalls’s varied list of product portfolio, Hydroid will significantly benefit from its expanding and strengthening presence in the global autonomous and unmanned maritime systems market. Additionally, Hydroid’s inclusion will boost Huntington Ingalls’s capabilities in the medium and small unmanned underwater vehicle (UUV) space.

Per a report by Markets and Markets, the global UUV market is projected to grow to $5.19 billion by 2022, at a CAGR of 14.07%, from 2017. The acquisition of Hydroid will, undoubtedly, be instrumental for Huntington Ingalls in addressing the company’s long-term prospects and cater to the surging demand within this market.

In a year's time, shares of this Zacks Rank #2 (Buy) company have depreciated 12.6% compared with the industry’s 29.8% decline. You can see the complete list of today’s Zacks #1 Rank (Strong Buy) stocks here. 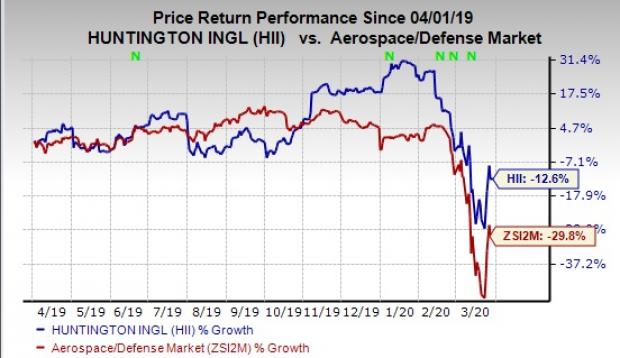