The rapid spread of the coronavirus has roiled the airline industry with travel demand dropping at an unprecedented level. The situation is far worse than what ensued in the weeks after the 9/11 terrorist attacks and during the 2008 global financial crisis. To contain the pandemic, large-scale government travel restrictions and country-wide lockdowns are imposed. Needless to say, the plight of airlines is only increasing.

The tumbling air-travel demand is reflected in the industry’s price performance. Since the beginning of February, the industry has plunged 47.4% compared with the S&P 500 Index’ 21.2% decline. 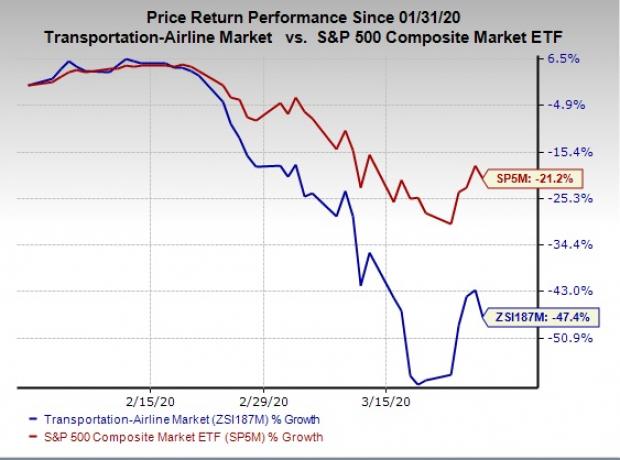 Amid this massive downturn, the $50-billion worth coronavirus relief package for U.S. passenger airlines, consisting of $25 billion in loans and $25 billion in grants, is a big breather. The aid, primarily aimed at preventing job losses in the industry, should help airlines manage costs better.

Job Cuts: A Possibility in the Long Term

The federal rescue package bars airlines (accepting the aid) from laying off employees before Sep 30, 2020. However, beyond the six-month period, job cuts seem imminent for some airlines, given the expectations of a slow demand recovery after the outbreak is checked.

United Airlines (UAL - Free Report) does not expect a rebound in travel demand for a while now. In fact, the airline anticipates “demand to remain suppressed” into the next year “based on how doctors expect the virus to spread and how economists expect the global economy to react”. The Chicago, IL-based airline reduced its April capacity by more than 60% and plans to slash capacity further more in May and June. Even with a 60% reduction in capacity, the carrier expects load factor (percentage of seats filled by passengers) to fall to the teens or even to a single digit in April. It warned of a smaller workforce “if the recovery is as slow” as it fears.

Meanwhile, Delta Air Lines’ (DAL - Free Report) CEO Ed Bastian urged employees to continue applying for voluntary unpaid leaves of absence as the relief package was not “a cure”. So far, more than 20,000 Delta employees applied for the leave. The Atlanta, GA-based airline has grounded roughly 600 aircraft with a 70% reduction in system wide capacity.

American Airlines CEO Doug Parker addressed its employees saying, that the company will be able to “ride through even the worst of potential future scenarios” with the help of the stimulus and the cash available.

On a further positive note, Southwest Airlines’ CEO Gary Kelly expressed his doubt whether the company will actually need money from the government.  He said, “We have opportunities to raise capital in the private markets and now we also have that opportunity with the federal government.”