AstraZeneca AZN announced that the FDA has approved the label expansion of its PD-1/PD-L1 immunotherapy, Imfinzi (durvalumab), as a first-line treatment for extensive-stage small cell lung cancer (ES-SCLC). The drug is approved in combination with standard-of-care (SoC) chemotherapies, etoposide plus either carboplatin or cisplatin (platinum-etoposide) for the indication.

Please note that Imfinzi is presently approved for unresectable, stage III NSCLC and advanced bladder cancer in second-line settings across the United States.

The approval from the FDA is based on encouraging data from the phase III CASPIAN study, which showed that Imfinzi in combination with platinum-etoposide achieved statistically significant and clinically meaningful improvement in overall survival (“OS”) compared to SoC alone. The company stated that Imfinzi is the only PD-1/PD-L1 immunotherapy, which demonstrated significant survival benefit in combination with platinum-etoposide.

Imfinzi in combination with SoC achieved a 27% reduction in risk of death with median OS of 13 months compared to 10.3 months for SoC alone. The Imfinzi combo also improved confirmed objective response rate.

However, earlier this month, the company had reported that a separate arm of the CASPIAN study evaluating Imfinzi plus Soc in combination with its second immunotherapy, tremelimumab, failed to meet primary endpoint of statistically significant improvement in OS.

Meanwhile, Imfinzi is being developed under other SCLC studies. Currently, the medicine is being tested in the phase III ADRIATIC assessment following a concurrent chemoradiation therapy for limited-stage SCLC.

SCLC constitutes about 15% of all lung cancer diagnosis and is a difficult disease to address as only 6% of patients are able to survive after five years of treatment.

Other than lung cancer, key phase III probes are evaluating Imfinzi in combination with tremelimumab for hepatocellular carcinoma, in earlier settings in NSCLC and head and neck squamous cell carcinoma among others.

However, Imfinzi is significantly lagging other approved PD-1/PD-L1 inhibitors, namely Bristol-Myers’ BMY Opdivo and Merck’s MRK Keytruda in terms of recognized indications and sales. Other PD-L1 inhibitors in the market are Pfizer’s PFE Bavencio and Roche’s Tecentriq. The label expansion in first-line ES-SCLC may improve the prospect for Imfinzi going forward.

AstraZeneca’s shares are down 14.8% so far this year compared with the industry’s decline of 15.5%. 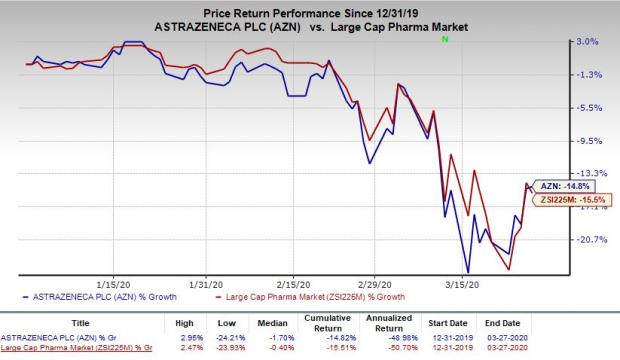 In a separate press release, the company announced that it has decided to stop a phase III study evaluating its type II diabetes drug, Farxiga, earlier than expected, following a recommendation from an independent Data Monitoring Committee (“IDMC”). The phase III study — DAPA-CKD — was evaluating the drug in patients with chronic kidney disease who are non-diabetic or have type II diabetes. The IDMC’s recommendation was based on overwhelming efficacy demonstrated by the drug during a routine assessment. Data from the study showed a meaningful benefit by achieving sustained decline in worsening of renal function or death in patients with CKD.

Microsoft (MSFT) Teams and Slack Integration to Aid User Base