Alaska Air Group Stock Sinks 40.3% in a Month: Here's Why

Shares of Alaska Air Group ALK, the holding company of Alaska Airlines, have lost 40.3% compared with the industry’s 20.4% decline in the past month. 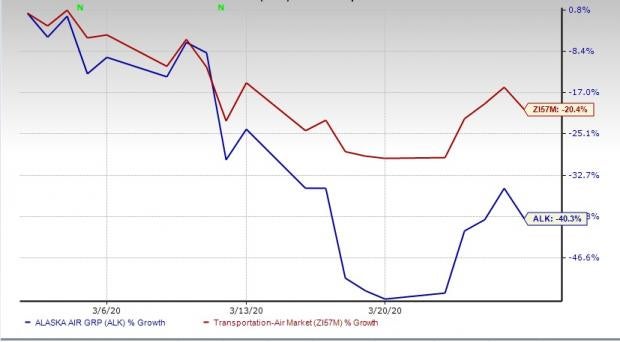 Alaska Airlines, like most of its peers, has been hit hard by the sharp drop in air-travel demand due to the coronavirus outbreak, which dented its prospects in the process.

Due to the coronavirus-induced waning demand, Alaska Airlines plans to reduce capacity by 70% for April and May. In fact, Alaska Airlines expects demand to be significantly suppressed for the next several months.

Additionally, to tackle this unprecedented crisis, Alaska Airlines suspended its quarterly dividend payouts and buybacks. It is also looking to curtail costs in the face of weakening revenues (down in excess of 80% since the commencement of the outbreak).

To bolster its balance sheet, the carrier drew down $400 million on its line of credit and closed another secured loan for $425 million as well.