The contract was awarded by the Naval Air Systems Command, Patuxent River, MD. The majority of the work related to the deal will be carried out in Fort Worth, TX.

The entire procurement is expected to be concluded by March 2023.

Rising security threat from terrorist activities and adverse geopolitical situations have resulted in an increased need for enhancing the nation's defense budget, of which combat aircraft constitutes a major portion. To this end, it is imperative to mention that given its advanced stealth capabilities, combined with fighter aircraft speed and agility, F-35 jet dominates the military aircraft market.

This is reflected by the program’s frequent contract wins, both from Pentagon and other U.S. allies. For instance, this January, Lockheed clinched an award worth approximately $2 billion for providing a consortium of services in relation to the F-35 program.

Such cost reductions initiatives, along with continued demand growth, will usher in more contract wins for Lockheed Martin, like the latest one, thereby fueling the defense major’s top-line growth.

The fiscal 2020 budget approved by the U.S. Senate mid-way last year provisioned a spending plan of $57.7 billion on aircraft. Interestingly, Lockheed Martin’s F-35 program has separately been allotted $11.2 billion, reflecting a 4.7% increase from the previously-allotted sum. Such stupendous budgetary amendment reflects solid growth prospects for Lockheed Martin’s F-35 program in the days ahead. 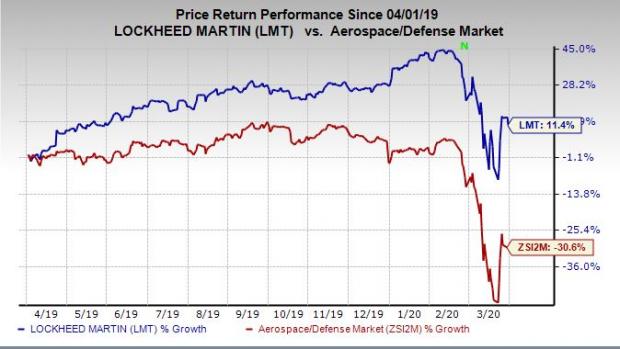 Huntington Ingalls delivered a positive earnings surprise of 2.83% in the last reported quarter.The Zacks Consensus Estimate for 2020 earnings reflects an annual improvement of 45.2%.

Northrop delivered an average positive earnings surprise of 13.12% in the last four quarters. The Zacks Consensus Estimate for 2020 earnings reflects an annual improvement of 8.6%.

Reasons to Add Algonquin Power & Utilities to Your Portfolio