Gol Linhas Aereas Inteligentes’ GOL first-quarter 2020 performance wasn’t much affected by coronavirus as the company started experiencing the impact of the health hazard since mid-March.

Although a little late, the carrier is witnessing significant decline in demand as evidenced by its March traffic results. Consolidated traffic, measured in revenue passenger kilometers (RPK), fell 29.7% to 2.2 billion in the month. Demand decreased both domestically (27.4%) as well as on the international front (42.9%), thanks to coronavirus-induced travel restrictions.

With slackened demand, the airline expects passenger unit revenue (PRASK) to have dipped approximately 1% year-over-year in the first quarter. Meanwhile, unit revenue (RASK) is anticipated to have been flat year over year. Additionally, earnings per American depositary share are predicted to have been 10 cents in the same period. The Zacks Consensus Estimate for the same stands at a loss of 7 cents. EBITDA margin is estimated to have been between 44% and 46%, indicating a rise from 29.7% reported in the first quarter of 2019.

With waning demand, the carrier removed 120 aircraft from its operations in the second half of March. As a result, it expects to have recorded an exceptional charge of R$80 million in the first quarter due to ineffectiveness in fuel hedges. The company also expects to incur R$200 million in the second quarter on account of the same issue. The carrier expects the majority of its fleet to remain grounded in April and May.

As of Mar 31, 2020, the Zacks Rank #4 (Sell) company’s total liquidity stood at R$4.3 billion with R$3 billion in cash and investments and R$1.3 billion in receivables. Including R$1.7 billion of prepaid expenses, maintenance reserves and security deposits, total liquidity was around R$6 billion.

Due to the coronavirus-related woes, shares of Gol Linhas have plunged 44.6% in a month’s time compared with the industry’s 37.6% decline. 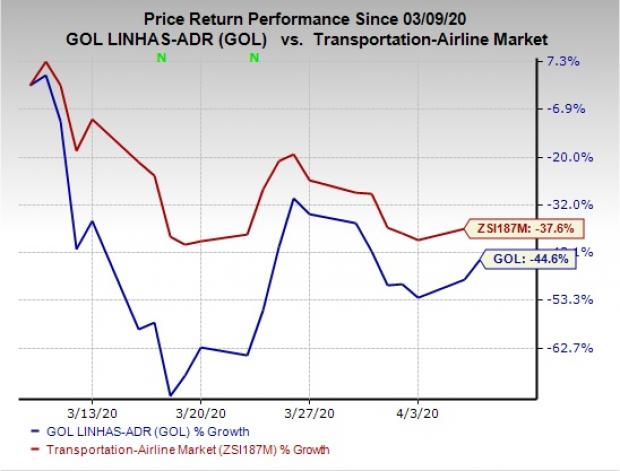 Cost Controls to Tackle the Crisis

With substantial loss of revenues due to the demand slump caused by the pandemic, Gol Linhas, which competes with the likes of Copa Holdings CPA, LATAM Airlines LTM and Azul (AZUL - Free Report) in the Latin American aviation space, took several measures to preserve cash. These include, but are not limited to, 50% reduction in payroll through unpaid leave, unpaid vacation, suspension of profit-sharing payments, tax deferrals, 35% salary deduction for all employees and 40% reduction from only the top 30 executives.

With uncertainty looming over the extent and duration of the global health peril, Gol Linhas suspended its 2020 and 2021 guidance until things return to normalcy.