Exxon Mobil Corporation (XOM - Free Report) recently announced that it plans to slash 2020 capital spending plan by 30% or $10 billion from its original guidance to $23 billion, as low commodity prices amid an oversupplied industry are a concern for the global energy space. The coronavirus pandemic has destroyed a huge chunk of energy demand in the global market. The latest guidance indicates a significant decrease from last year's capital spending of $31.1 billion. Notably, the overall capital budget marks the company’s lowest in the past four years.

Although it did not provide details of its budget cut, Permian is expected to witness the largest share of capital spending cut, as short-cycle investments in the basin can be easily changed according to the market movements. The company spends around $6 billion per annum in the prolific region, per RBC Capital Markets. It now expects decreased activities in the region to negatively impact its drilling and well completion pace.

The company’s significant spending deduction is in line with efforts from other energy majors including Chevron Corporation (CVX - Free Report) , BP plc (BP - Free Report) and Royal Dutch Shell plc (RDS.A - Free Report) . Notably, Chevron and BP reduced their shale activities to cope up with the current market uncertainty. Importantly, the oil companies have reduced their planned project spending for the year by a total of $54 billion, per Reuters.

The largest-publicly traded U.S. energy company intends to curb cash operating expenses by 15% to boost profit levels amid a low oil and gas pricing environment. The move is expected to be supported by lower cost of energies in operating activities and increasing efficiencies. The company’s total costs and other deductions were recorded at $244.9 million in 2019, reflecting a nearly 6% year-over-year decline.

On a positive note, ExxonMobil expects long-term industry fundamentals to remain unchanged. As such, demand will rise as soon as the market reverts back to its normal state. Keeping the long-term aspect in mind, the company is trying to keep its major projects unaffected. Also, it expects its current offshore Guyana operations to be unaffected. The commencement of the second phase of the Liza development is scheduled for 2022. However, due to the current deferred activities, its Payara development can be delayed by six months to a year.

The company’s Rovuma LNG project located in Mozambique, which was scheduled for commencement in 2020, has also been pushed back. Nonetheless, it is on track with the Coral LNG development in the region.

Upstream profits are expected to decline $1.3-$1.6 billion in the first quarter from fourth-quarter 2019 due to fall in liquids prices. It will likely bear an additional $100-$300 million brunt due to declining gas prices. Profits from the refining business are expected to decline $600-$800 million from fourth quarter. However, the chemicals business is expected to witness a jump of $400-$500 million from fourth quarter’s loss of $355 million. The Zacks Consensus Estimate for earnings for the quarter is pegged at 23 cents per share, indicating a 58.2% decline from the year-ago period.

The Zacks Rank #3 (Hold) company’s stock has plunged 50.3% year to date compared with 44.9% fall of the industry it belongs to. You can see the complete list of today’s Zacks #1 Rank (Strong Buy) stocks here. 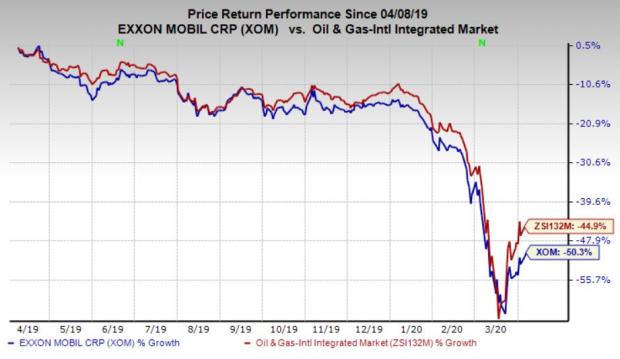