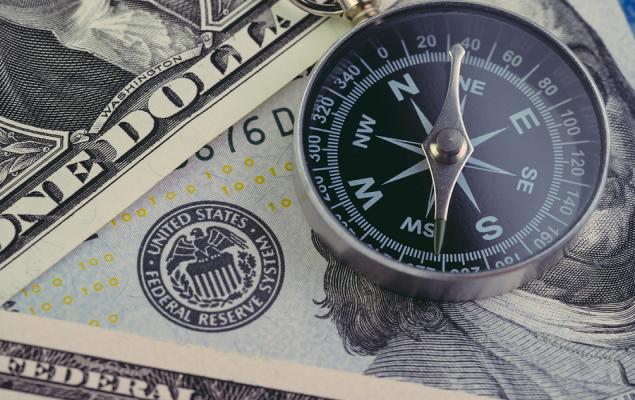 Patience: The Virtue Of A Successful Investor

Fear trading may have come to an end, but that does not mean that we have bottomed out. The VIX, aka the “fear gauge,” is trading at below 45, its lowest level in over a month. The S&P 500 has rallied over 20% from its lows on March 23rd. Some are calling this the end of a very short-lived bear market and the beginning of a new bull market. Don’t be fooled, we are not out of the woods yet, and I see a further downside on the horizon. I would not suggest that you chase this market rally. Be patient with this choppy market. Hoard cash during ‘bear rallies’ and buy when the market breaks.

Bear rallies are expected during market crashes, and this pandemic-driven downturn is no exception. Below you can compare the most significant market crashes over the past century (this graph was created by a blogger and can be found through this link). The one thing these market crashes have in common is that they all experienced sizable bear rallies throughout the market downturn. 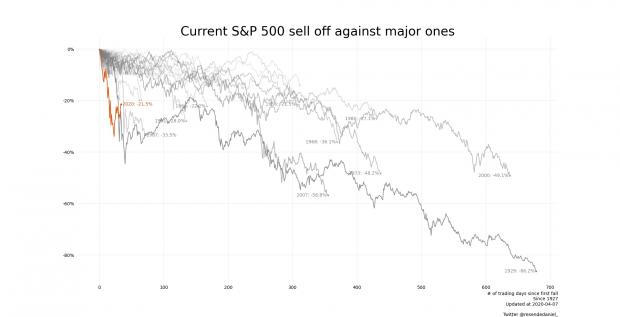 You can see the current pandemic driven crash (highlighted in orange) has illustrated the most rapid S&P 500 breakdown to rally ever. If history can be our guide, this is not the end of the market pain. It has been roughly 1.5 months since the market began to erode, and the impact of this virus on the broader market is just starting to be understood.

The novel coronavirus has shut down economies around the world and completely halted global demand. Most of the world is under quarantine, and businesses are already struggling to keep their financials afloat, less than a month into their shutdown. The US government has stepped in with a $2 trillion stimulus bill and the Federal Reserve has taken unprecedented measures in its monetary policy to support the economy, but will it be enough?

In short, I believe that the answer is no. In the past two weeks, nearly 10 million Americans filed for unemployment, and we haven’t even hit the worst of the issues yet. Bankruptcies are going to start running rampant the longer this economic shut down ensues. I believe that a wave of bankruptcies will be a catalyst for the next leg down.

Don’t worry about your blue-chip stocks with healthy balance sheets. The businesses that are at risk of default are those that had already been under financial strain prior to the pandemic. Companies that are over leveraged and lack liquidity.

Brick-and-mortar retail is an obvious loser during this period of storefront shutdowns. Department stores like Macy’s (M - Free Report) and JCPenney are a dying breed and their balance sheets are illustrating this. Credit agencies continue to downgrade these companies credit rating deeper into junk bond territory as their risk of default surges. These stores’ massive in-store overhead, over-leveraged balance sheets, and lack of sizable online presence will be these companies undoing.

Other nonessential businesses like cruise liners and amusement parks are also at risk of failing. Six Flags SIX is one such example. SIX had already been through bankruptcy in 2009 because of an overleveraged balance sheet, and its current situation feels like déjà vu. Today the theme park giant has amassed almost as much debt as its pre-bankruptcy levels. Six Flags is operating quarter-to-quarter, just hoping that it will have enough income to cover the massive interest expense, which made up 63% of last year’s earnings. The pandemic could be the catalyst for a second bankruptcy, and this time it could be a complete liquidation of assets (chapter 7 bankruptcy).

Cruise liners are forever tabooed by the novel coronavirus, with cruises around the globe incubating this virus and spreading it across entire ships. I see the demand for this type of leisure plummeting post-pandemic. I suspect bankruptcy and consolidation to follow amongst the big players like Carnival (CCL - Free Report) , Royal Caribbean (RCL - Free Report) , and Norwegian Cruise Line NCLH. These companies are not essential economic entities, and the government will not overextend itself to save them from dying.

Stocks I Am Looking To Buy On A Break:

I’m sticking with blue-chip names with healthy, liquid balance sheets. The prices I have set below are the prices at which I am going to beginning loading up on these shares. Remember to not buy all at once but rather average down with the market.

How Far Have Apple's Earnings Estimates Fallen During the Coronavirus?