Per the contract, Fluor will continue to provide forward operating support for Afghanistan through December 2020, for U.S. Africa Command (AFRICOM) through June 2020 or as extended until Fluor begins work on LOGCAP V, and for U.S. Southern Command (SOUTHCOM) through March 2021, or until it transitions to LOGCAP V.

The company’s Government segment has been providing high-quality rapid response to contingency construction, humanitarian assistance and disaster recovery support for more than a decade in the most severe and remote environments. Specifically, it has been providing services to the U.S. Army under LOGCAP since 2008.

During third-quarter 2019, Fluor had planned to sell the Government segment. Meanwhile, on Feb 18, 2020, the company announced that it has withdrawn the plan to sell the said segment, as it has gained confidence in its solid liquidity position and viable options for generating cash flow. The business will cease to be reported as a discontinued operation from first-quarter 2020.

According to preliminary numbers, new awards were $2.2 billion in 2019 and $146 million in the fourth quarter for the Government segment. Backlog at the end of 2019 is expected to be $3.8 billion.

Shares of the company have rallied more than 30% in the past month compared with the Zacks Engineering - R And D Services industry’s 6.6% increase. We believe new contract wins will help the company to drive growth. Over the last few quarters, major wins have enabled Fluor to expand long-term recurring revenue opportunities. 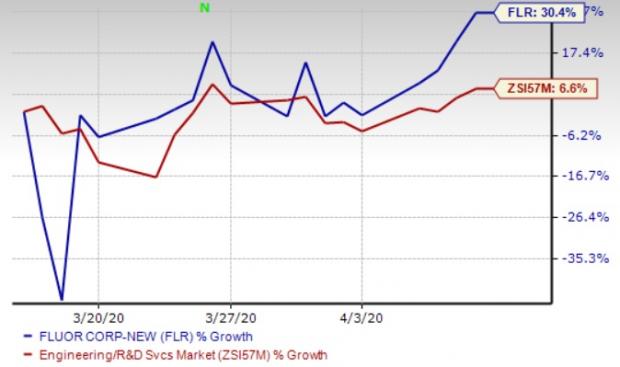 Taylor Morrison surpassed estimates in all the trailing four quarters, with the average being 14.1%.