The COVID-19 pandemic has resulted in unprecedented challenges for the auto sector, thereby creating a demand shock as consumers’ confidence has dropped significantly. Amid the gloomy scenario, auto companies like Ford, Lithia Motors and Goodyear Tire came up with bleak preliminary first-quarter results.

Coronavirus-led financial crisis prompted many companies to resort to strategic cost-cut measures in a bid to preserve financial flexibility. Dividend cuts, buyback suspension, employee layoffs and hiring freezes are becoming commonplace. With the pandemic showing little signs of abatement, many companies are extending factory closures. Last week, Honda Motor pushed back the restart of plants in Mexico through Apr 30.

Meanwhile, many carmakers have joined the fight against coronavirus by responding to the government’s request to ramp up production of ventilators in order to fill the shortage in U.S. hospitals. In this regard, some interesting partnerships between medical device makers and car manufacturers have been formed. Ford widened efforts to develop and produce critically-needed medical equipment and supplies for health care staff, first responders as well as coronavirus patients. Last week, General Motors also began mass production of Ventec Life Systems V+Pro critical care ventilators. Cummins collaborated with 3M Company for the expansion of the latter’s high-efficiency particulate filter production for its PAPRs.

1. Goodyear Tire (GT - Free Report) released preliminary financial results for first-quarter 2020, wherein the company’s revenues totaled $3 billion, down from $3.6 billion recorded in the prior-year period. Its overall tire volume fell 18% from the prior-year level to 31 million units, primarily due to a substantial decline in global original equipment shipments. Goodyear anticipates to come up with pretax loss within $185-$195 million in first-quarter 2020. The company expects 2020 capital expenditure to be no more than $700 million. It temporarily suspended quarterly dividend, which is likely to preserve approximately $37 million of cash on a quarterly basis. As of Mar 31, 2020, Goodyear’s total liquidity was $3.6 billion, including about $970 million in cash and cash equivalents, which will be used to deal with the downturns caused by the pandemic. Its total debt balance was $6.5 billion as of Mar 31.

2. Lithia Motors (LAD - Free Report) anticipates first-quarter net income in the band of $45.5-$47 million, indicating a decline from the year-ago figure of $56 million. Net income is forecast in the range of $1.95-$2 per share, indicating 18.3% year-over-year drop from the midpoint of the guided range.With ‘shelter-in-place’ policies implemented in March, vehicle unit sales tumbled 50%, dealing a blow to both used and new vehicle sales. Same-store SG&A, as a percentage of gross profit, is projected in the range of 74-76%. Anticipating a bleak scenario ahead, the company reduced its headcount by 37%, mainly through furloughs. All acquisitions have also been deferred until the second half of 2020. In a bid to preserve financial flexibility, Lithia Motors also suspended stock buybacks.Lithia Motors has $550 million in cash and available credit. The firm has more than $1 billion in total liquidity, factoring in additional liquidity potential.

3. Ford (F - Free Report) anticipates first-quarter adjusted pretax loss and net loss of $600 million and $2 billion, respectively. The firm’s first-quarter sales will be adversely affected by depressed demand for vehicles, thanks to the coronavirus outbreak. The company expects revenues to be $34 billion, indicating a decline of 16% year over year. First-quarter vehicle wholesale shipments are down 21% from the corresponding period of 2019. On a positive note, Ford’s CFO emphasized on the fact that the firm has enough cash to stay afloat at least till the end of the third quarter even “with no incremental vehicle production and wholesales or financing actions”.As of Apr 9, the Zacks Rank #3 (Hold) company had about $30 billion in cash, including $15.4 billion that the firm withdrew from its two credit lines last month to preserve financial flexibility. You can see the complete list of today’s Zacks #1 Rank (Strong Buy) stocks here.

4. Fiat Chrysler (FCAU - Free Report) issued a recall of more than 550,000 pickup trucks and SUVs worldwide, in order to fix the windshield wiper issue that tends to become loose and stop the wipers from functioning properly. However, the company has no reports of crashes or injuries yet. Most recalled vehicles are in the United States and Canada. The company’s latest move is expected to affect certain 2019 and 2020 Ram 1500 pickups, 1500 Classic pickups and Jeep Compass SUVs.Fiat is implementing a number of actions to boost the firm’s cash position in the face of rising uncertainty due to coronavirus crisis. It recently completed the syndication of a €3.5-billion credit facility with a group of 13 banks, including two of the original underwriting banks.

5. Navistar International Corporation (NAV - Free Report) announced the implementation of a number of actions to boost the firm’s cash position in a bid to sail through the coronavirus crisis.The company slashed capital spending for 2020 by 30% and postponed 30% of the information-technology project spend to minimize costs during this period of reduced business. Compensation reductions include 35% salary cuts for the CEO and board of directors, and 10-30% pay cut for U.S.-based, salaried exempt, non-represented employees. Cost-reduction initiatives undertaken by the company are expected to preserve about $300 million in cash, which will be used to deal with the losses caused by production shutdowns. As of Apr 10, the company had $1 billion in both consolidated cash and cash equivalents, and manufacturing cash and cash equivalents. 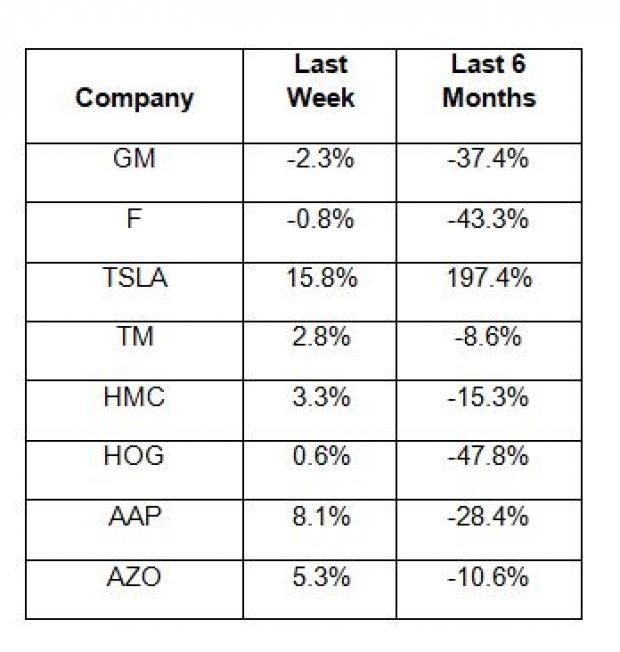 Watch out for further impact of the pandemic on the auto sector. All eyes will remain glued to how automakers deal with the coronavirus rampage. Investors are keenly awaiting the upcoming quarterly results of major auto companies including PACCAR and O’Reilly that are scheduled to release this week.

Is Southwestern Energy (SWN) a Good Stock to Pick Now?