Acorda (ACOR) to Report Q1 Earnings: What's in the Cards?

Acorda boasts an excellent earnings surprise history, surpassing expectations in each of the trailing four quarters, the average being 49.90%. In the last reported quarter, the company delivered a positive surprise of 63.41%.

Shares of Acorda have plummeted 47.5% year to date against the industry’s increase of 1.4%. 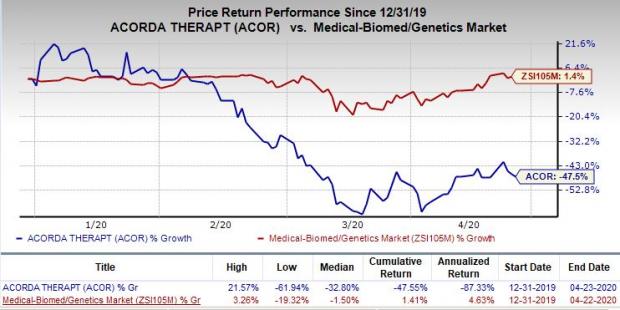 Acorda’s Parkinson’s disease (PD) drug Inbrija was launched in the United States last February. Sale of the drug has been rising sequentially every quarter ever since, a trend that most likely continued in the soon-to-be-reported quarter as well.

Moreover, in September 2019, Inbrija was also granted a marketing approval by the European Commission (EC). This should further boost the drug’s sales in the future quarters.

Meanwhile, Acorda’s lead multiple sclerosis (MS) drug Ampyra is facing generic competition in the United States. Sales of Ampyra plunged significantly year over year due to generic launches in 2019. This sales erosion is likely to have hurt the company’s first-quarter top line.

In September 2018, Ampyra lost its exclusivity as generics like Mylan’s authorized generic version entered the market.

We note that the coronavirus disease ravaged the world of late. Hence, in the wake of the current adverse scenario, it remains to be seen whether the sales of Acorda’s drugs took a hit from the COVID-19 pandemic in first-quarter release.

Our proven model does not conclusively predict an earnings beat for Acorda this season. The combination of a positive Earnings ESP and a Zacks Rank #1 (Strong Buy), 2 (Buy) or 3 (Hold) increases the odds of a positive surprise. But this is not the case here.

Earnings ESP: Acorda has an Earnings ESP of 0.00% as both the Most Accurate Estimate and the Zacks Consensus Estimate are pegged at a loss of 35 cents per share. You can uncover the best stocks to buy or sell before they're reported with our Earnings ESP Filter.

Here are some biotech stocks that have the right combination of elements to beat on earnings this time around:

Gilead Science (GILD - Free Report) has an Earnings ESP of +20.00% and a Zacks Rank #3. The company is scheduled to release results on Apr 30. You can see the complete list of today’s Zacks #1 Rank stocks here.

Alexion Pharmaceuticals (ALXN - Free Report) has an Earnings ESP of +0.83% and a Zacks Rank of2. The company is scheduled to release results on May 6.