The conglomerate delivered better-than-expected results in the last four quarters, with average positive earnings surprise of 34.73%. In the last reported quarter, the company’s earnings of 21 cents per share surpassed the Zacks Consensus Estimate of 18 cents by 16.67%.

In the past three months, the company’s shares have moved down 46.6% compared with the industry’s decline of 21.1%. 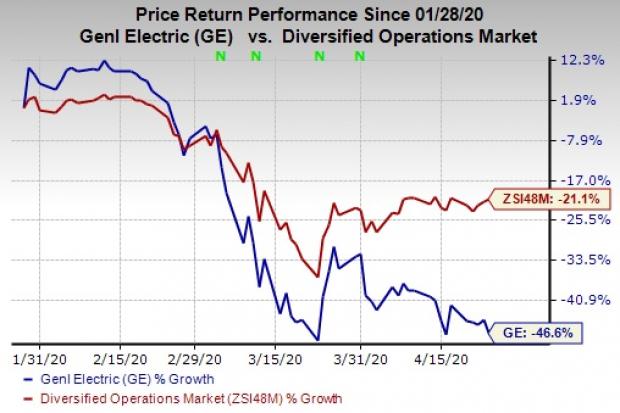 Key Factors and Estimates for Q1

General Electric’s quarterly results are expected to reflect the impacts of uncertainties caused by the coronavirus pandemic. Its adjusted earnings per share are anticipated to be below 10 cents mentioned earlier. In addition, Industrial free cash flow is expected to be near ($2) billion (same as mentioned earlier).

However, the company’s deleveraging actions, healthy liquidity position, cost-management actions (including those taken in the wake of the pandemic) and technological expertise are expected to have supported its performance.

On a segmental basis, the coronavirus outbreak and the grounding of 737 Max are anticipated to have influenced the performance of Aviation. Further, demand reduction for equipment used in medical procedures as well as growth in the need for scanning and other monitoring products are anticipated to get reflected in Healthcare’s results.

For first-quarter 2020, the Zacks Consensus Estimate for the Aviation segment, pegged at $7,477 million, indicates a decline of 6% year over year and 16.3% sequentially. Also, Healthcare’s revenue estimate of $4,002 million suggests a year-over-year decline of 14.5% and a sequential fall of 25.9%.

In addition to Aviation and Healthcare segments, the revenue estimate for the Power segment, pegged at $4,512 million, implies a decline of 20.3% from the year-ago reported figure and a sequential fall of 16.5%. However, Renewable Energy’s revenue estimate is pegged at $2,689 million, suggesting growth of 67.6% from the year-ago quarter’s reported number and a 43.4% decline from the previous quarter’s figure.

Notably, the Zacks Consensus Estimate for the Industrial segment’s (comprising Power, Aviation, Renewable Energy and Healthcare) revenues for the to-be-reported quarter is pegged at $19,588 million, suggesting a 23.2% decline from the year-ago quarter’s number and a 20% dip from the previous quarter. Profits for the Industrial segment are likely to be $2,012 million, indicating a 20.3% fall from the year-ago quarter’s reported number and a 39.8% decline from the previous quarter.

Our proven model doesn’t predict an earnings beat for General Electric this time around. The combination of a positive Earnings ESP and a Zacks Rank #1 (Strong Buy), 2 (Buy) or 3 (Hold) increases the odds of an earnings beat. But that’s not the case here. You can uncover the best stocks to buy or sell before they’re reported with our Earnings ESP Filter.

Earnings ESP: The company has an Earnings ESP of 0.00%, as the Most Accurate Estimate and the Zacks Consensus Estimate are pegged at 6 cents.

Here are some companies that you may want to consider as according to our model, these have the right combination of elements to post an earnings beat this quarter:

Silgan Holdings Inc. (SLGN - Free Report) presently has an Earnings ESP of +1.32% and sports a Zacks Rank #1. You can see the complete list of today’s Zacks #1 Rank stocks here.