Is a Beat in Store for Amarin (AMRN) This Earnings Season?

We expect Amarin Corporation PLC (AMRN - Free Report) to beat expectations when it reports first-quarter 2020 results on Apr 30, before market open. In the last reported quarter, the company delivered a positive surprise of 300.00%.

Notably, Amarin’s earnings history is impressive. This pharmaceuticals company outpaced estimates in each of the last four quarters, with the average beat being 204.17%.

Shares of Amarin have declined 63.5% so far this year against the industry’s increase of 4.2%. 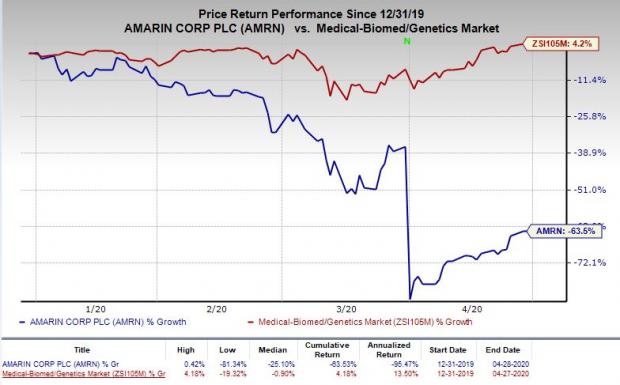 In its preliminary results announced earlier this month, the company estimated its net total revenues for the first quarter to be approximately $150 million, up almost 105% year over year. However, this estimate predominantly reflects Vascepa sales in the United States. The company expects the final figure to be modestly higher, which will include actual international revenues.

Amarin’s Vascepa solid momentum is expected to have continued in the first quarter. Notably, the drug demonstrated solid sales on the back of strong demand and an expanded sales force promoting it in 2019. The drug is marketed as an adjunct to diet to reduce triglyceride levels in severe hypertriglyceridemia patients. Moreover, Vascepa’s label expansion as an adjunct therapy to reduce cardiovascular risk based on data from REDUCE-IT cardiovascular outcomes study was approved by the FDA in December 2019, which is likely to have boosted sales.

The company earns fees from its licensed partners related to commercialization of Vascepa outside the United States, which is expected to have increased in the soon-to-be-reported quarter. The Zacks Consensus Estimate for licensing revenues stands at $2.15 million.

We note that, the company has been expanding its sales team to support the launch of Vascepa in the expanded label. We expect the launch to have driven operating expenses higher in the soon-to-be reported quarter.

Investor focus will be on details pertaining to launch uptake of Vascepa in expanded patient population as well as in Canada, and impact of competition from other approved drugs, especially Sanofi (SNY - Free Report) and Amgen’s (AMGN - Free Report) PCSK9 inhibitors, Praluent and Repatha, respectively on the first-quarter call.

We expect the company to provide an update on the anticipated impact of COVID-19 on its business in the rest of 2020 on its earnings call. Moreover, Vascepa is under review in Europe. The company may also provide an update related to the potential approval of Vascepa and its commercialization plan for the drug in Europe.

Last month, the United States District Court for the District of Nevada ruled in favor of generic companies related to patent litigation against Vascepa. The court stated that all patent claims made by Amarin in the litigations were “obvious” and thus invalid. Please note that the patent litigations do not include any patent related to Vascepa’s expanded label.

Amarin has strongly opposed the court’s ruling and plans to appeal against it in early May. The company also stated that it will file an injunction against generic companies, restricting them from launching a generic version of Vascepa until a decision related to its appeal is obtained.

Although, the unfavorable ruling did not have any impact on Vascepa sales, it significantly affected stock price as any generic competition for Vascepa will hurt future sales.

Our proven model predicts an earnings beat for Amarin this time around.  The combination of a positive Earnings ESP and a Zacks Rank #1 (Strong Buy), 2 (Buy) or 3 (Hold) increases the odds of an earnings beat. You can uncover the best stocks to buy or sell before they’re reported with our Earnings ESP Filter.

Another Stock That Warrants a Look

Here is a biotech stock that you may also want to consider, as our model shows that it has the right combination of elements to deliver an earnings beat in its upcoming release.

Allogene Therapeutics, Inc. (ALLO - Free Report) has an Earnings ESP of +2.44% and a Zacks Rank #2. The company is scheduled to release first-quarter results on May 6.