Shares of Molson Coors declined nearly 5% in the pre-market trading session. The Zacks Rank #3 (Hold) company’s shares have lost 16.9% in the past three months compared with the industry’s decline of 24.9%. 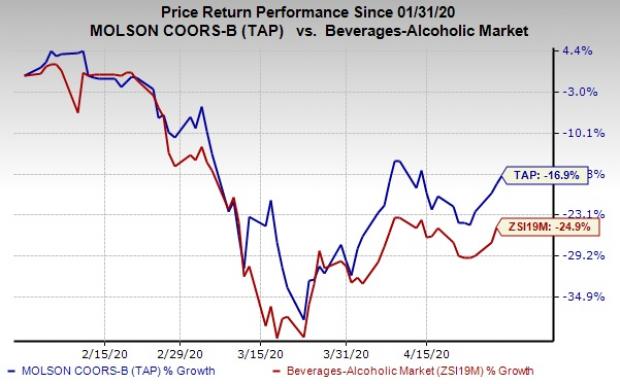 Molson Coors’ underlying adjusted earnings of 35 cents per share declined 32.7% year over year but beat the Zacks Consensus Estimate of 30 cents. The bottom line was impacted by estimated keg sales returns and finished goods’ obsolescence reserves, which led to incurring $50 million costs as the on-premise were hurt by the impacts of the coronavirus pandemic. Further, lower financial volume, inflation and negative mix led to the decline. However, favorable net pricing, cost savings, and lower marketing, general and administrative (MG&A) expenses partly offset the declines.

Net sales declined 8.7% to $2,102.8 million and missed the Zacks Consensus Estimate of $2,173 million. The decline was mainly caused by unfavorable mix as well as keg sales returns and reimbursements of $31.5 million associated with the on-premise impacts of the coronavirus pandemic across major markets. This was partly offset by higher global net pricing. On a constant-currency basis, net sales decreased 8.2%.

However, Molson Coors’ worldwide brand volume declined 1.8% to 17.9 million hectoliters and financial volume declined 8.3% to 18.4 million hectoliters. The decline in worldwide brand volume was mainly attributed to declines in Europe due to the impacts of the coronavirus outbreak. Meanwhile, financial volume was hurt by the impacts in North America due to the unfavorable shipment timing in the United States, including brewery downtime-related Milwaukee tragedy, market share declines and lower contract brewing volume.

North America: Molson Coors’ North America net sales declined 7.4% to $1,789.7 million on a reported basis and 7.2% in constant currency, driven by a decline in financial volume and a 1.3% fall in net sales per hectoliter (brand volume basis). North America brand volume rose 0.4%, while financial volume decreased 7.8%. Financial volume decline was attributed to unfavorable shipment timing in the United States, including brewery downtime for the Milwaukee tragedy, lower contract brewing volume, and estimated on-premise keg sales returns and reimbursements of $19.0 million due to the coronavirus outbreak.

Net sales per hectoliter were hurt by unfavorable geographic mix due to growing licensed volume in Mexico and on-premise keg sales returns and reimbursements, partly offset by higher net pricing. Brand volume benefited from favorable timing of trading days versus the prior year as well as March pantry loading, particularly in the United States, partly negated by market share declines in North America. Underlying EBITDA declined 12.7% to $348.7 million, with a constant-currency decline of 11.9%.

Europe: The segment’s reported net sales dropped 15.5% to $317.6 million and 13.4% in constant currency. The net sales decline was attributed to lower volume, drop in net sales per hectoliter and estimated on-premise keg sales returns of $12.5 million due to the coronavirus outbreak. Net sales on brand volume basis fell 5.2%, owing to unfavorable geographic mix mostly in its high-margin U.K. business, partly offset by favorable pricing. Notably, the company’s U.K. business has greater exposure to the on-premise channel, which caused more estimated impacts of on-premise keg sales returns due to the pandemic. Financial volume fell 10% and brand volume was down 8.5% due to the virus spread. The segment reported underlying EBITDA loss of $4.1 million compared with earnings of $13.5 million in the prior-year quarter.

Molson Coors ended the first quarter with cash and cash equivalents of $666.1 million, and total debt of $9,477 million. This resulted in net debt of $8,811 million at the end of the quarter.

The company used net cash of $18.1 million in operating activities in the first quarter, with used underlying free cash flow of $216.6 million.

Going forward, the company remains committed to delivering more cost savings under its next-generation cost-saving program, which began in 2020. It expects the current program to generate cost savings of $600 million over the three years ending 2022. The cost savings include $150 million related to the revitalization plan.

Further, the company expects to incur one-time costs of $120-$180 million for generating savings from the revitalization plan.

The company expects the coronavirus pandemic to have significant impacts on its performance in the second quarter as well as 2020 results. Consequently, it withdrew its guidance for 2020. The impacts are expected to primarily relate to the closure of on-premise sales channels in almost all markets as well as other impacts of the pandemic.

The company notes that the coronavirus pandemic continues to hurt the on-premise channel in April 2020 due to extended closures. However, it notes that the benefits of pantry loading, which aided North America performance in March, have not continued in April.

National Beverage Corp. (FIZZ - Free Report) has delivered a positive earnings surprise of 2.9%, on average, in the trailing four quarters. It currently sports a Zacks Rank #1 (Strong Buy). You can see the complete list of today’s Zacks #1 Rank stocks here.

The Clorox Company (CLX - Free Report) has a long-term earnings growth rate of 5.2%. The company presently flaunts a Zacks Rank #1.